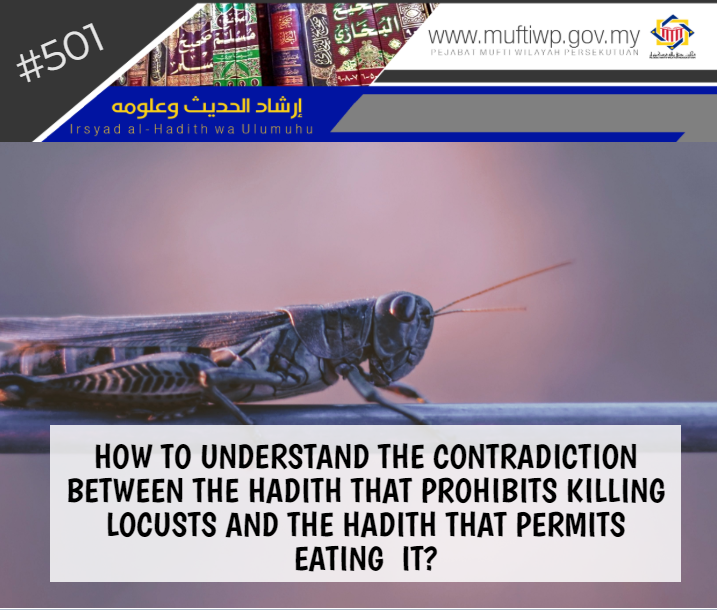 I have a question. I once heard that there is a hadith that prohibits killing locusts because they are among the biggest soldiers of Allah. My question is, if the hadith is true, isn’t it a contradiction to the hadith which permits eating it? Hope for an explanation pertaining to this matter.

First and foremost, we would like to emphasize that there are several hadiths which state the permissibility of eating locusts. Among them is the hadith narrated by Abdullah bin Abi Aufa RA that:

We have already discussed the issues pertaining to the permissibility of eating locusts and the related matters in-depth in our previous articles:

Hadith on the Prohibition to Kill Locusts

Here, we include some opinions from scholars on this hadith:

How to understand the contradiction between this hadith and the other hadith which permits eating it?

Coming back to the above question, basically, there is no contradiction between hadith Abu Zuhair al-Numairi and the hadith which permits eating locusts. However, both hadiths should be seen and understood in two different contexts. This is because, the scholars understand the hadith which prohibits killing locusts is when they are killed for fun or in vain without any reason permitted by syara’. Isn’t this what has been stated by the Prophet PBUH:

"There is no person who kills a small bird or anything larger for no just reason, but Allah, the Mighty and Sublime, will ask him about it." It was said: "O Messenger of Allah, what does just reason;' mean?" Her said: "That you slaughter it and eat it, and do not cut off its head and throw it aside."

Therefore, it is haram to kill locusts in vain or without any permissible excuse, but it is permissible to kill them if it is to benefit from them like to eat and etc.

Imam al-Baihaqi also stated in his book that if this narration is sahih, it can be understood that it (probably) means that if there is no harm towards the crops (due to these locusts). If there is a contradiction between these two, then it is permissible to avoid the harm from taking place by destroying or killing them, or (probably) it is also a sign to never destroy (put an end to) them, whether by destroying or killing. (See Syu’ab al-Iman, 12/409)

“Majority of the scholars present their argument by saying that leaving it (which is by not killing them) will cause destruction to property. Verily, the Prophet PBUH gave facility (rukhsah) to kill a Muslim if he wants to take unjustly (seize or steal) one’s property (the person himself kill him or any other person). Hence, for locusts if they cause destruction to the property is more just (or prioritised) to make it permissible for them to be killed. Have you not seen them (the scholars) have decided on the permissibility of killing snakes and scorpions? This is because, both of them harm humans. So, the same is the case (the ruling) for locusts.” (See Tafsir al-Qurtubi, 7/268).

Based on the above discussion and arguments, we are inclined to the opinion that this hadith of Abu Zuhair al-Numairi, its sanad is good and does not contradict with the other hadith which permits eating locusts. However, both hadiths should be seen and understood in two different contexts in which we are prohibited to kill locusts in vain and without any reason permitted by syara’. However, if it is for the purpose of benefiting from them such as eating them, then it is permissible to kill them. The same is when they cause harm and destruction towards others’ property. So, majority of the scholars are of the opinion that it is permissible or not prohibited to kill them.

May Allah SWT give us all clear understanding in practicing the hadith of the Prophet PBUH. Ameen.