IRSYAD AL-HADITH SERIES 503: THE DIVISION OF THE ACTIONS OF PROPHET PBUH 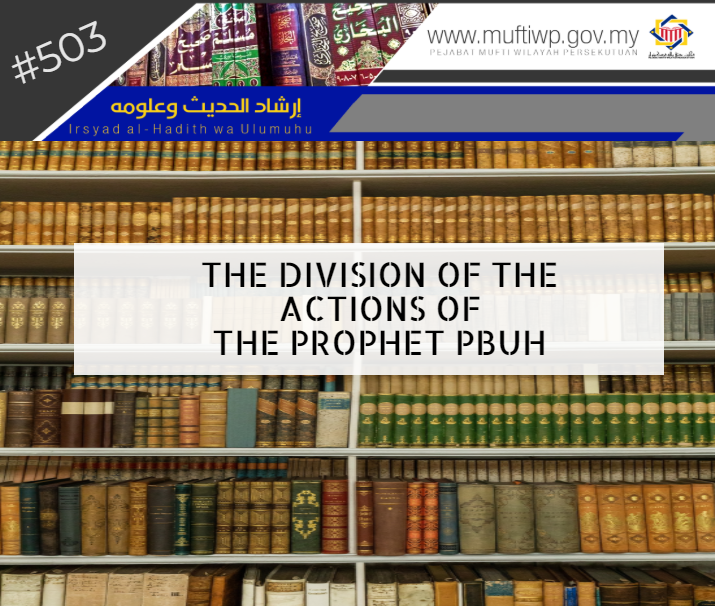 What are the divisions for Sunnah or the Prophet PBUH’s actions as divided by the scholars in their books?

Based on the above question, indeed, there are scholars who divide Sunnah into two which are tashri’iyyah and non-tashi’riyyah. Verily, this division is included under one of the divisions of Sunnah in which it is taken from the definition of the Sunnah itself.

The Definition of Sunnah

Sunnah lexically means a way of life which can either be commendable or not. While for the technical meaning, it is divided into two from the definition by the scholars of hadith and the scholars of usul:

In conclusion, the scholars of hadith and usul decided to say that Sunnah is everything related to the Prophet PBUH either in the form of words, actions or consent from the Prophet PBUH.

Division of Sunnah Based on the Definition

Looking at the above definition, Sunnah can be divided into three divisions:

Sunnah Qawliyyah is every utterance of the Prophet PBUH. For example:

It is narrated by Umar bin al-Khattab RA where the Prophet PBUH said:

The reward of deeds depends upon the intentions

It is narrated by Malik bin al-Huwairith RA where the Prophet PBUH said:

It is narrated by Ibn Umar RA where the Prophet PBUH said:

"None should offer the 'Asr prayer but at Bani Quraiza." The 'Asr prayer became due for some of them on the way. Some of them decided not to offer the Salat but at Bani Quraiza while others decided to offer the Salat on the spot and said that the intention of the Prophet (ﷺ) was not what the former party had understood. And when that was told to the Prophet (ﷺ) he did not blame anyone of them.

After we understand the divisions of Sunnah based on the definitions given by the scholars, so, we will go to another division of Sunnah or anything related to the Prophet PBUH’s actions which are tashri’iyyah or non-tashri’iyyah even we originally should follow the Prophet PBUH in every matter as in the saying of Allah SWT:

Say, [O Muhammad], "If you should love Allah, then follow me, [so] Allah will love you and forgive you your sins

Divisions of Sunnah Actions of the Prophet PBUH

Sunnah tashri’iyyah is what comes from the Prophet PBUH by considering his position as a prophet as well as the messenger of Allah SWT. So, it is named as the source for Islamic law (tashri’iyyah).

"By Allah! I ask for forgiveness from Allah and turn to Him in repentance more than seventy times a day."

It is narrated from Aisha R.Anha that she says:

In understanding this hadith, scholars followed what has been mentioned by Sheikh Dr Wahbah al-Zuhaili in his book where he stated that everything that comes from the Prophet PBUH in the form of habits as a human-like the way he stands, sits, walks, sleeps, eats, drinks and other actions are not considered as a sanctioning. This is because those actions appear due to his human nature and not because it is sanctioned. The scholars named these actions with the name al-jibilliyyah unless there are dalils which command us to do so. At that time, it becomes a sanctioning due to specific reasons and not solely because it comes from the Prophet PBUH. For example, eating with one’s right hand is mentioned in a hadith narrated from Ibn Ummm Salamah: "Dear child, mention Allah's Name, eat with your right hand, and eat from what is next to you." [See: al-Wajiz fi Usul al-Fiqh al-Islami, 189]

Hence, based on the above discussion, it can be concluded that there are three divisions in dividing the actions of the Prophet PBUH as what is divided by the scholars or its other name is jibilliyyah and the last one is matters specified only for the Prophet PBUH.

He who obeys the Messenger has obeyed Allah; but those who turn away - We have not sent you over them as a guardian.

However, not everything that comes from the Prophet PBUH is a sanctioning (tashri’iyyah). This is because, there are some actions or matters did by the Prophet PBUH which do not come in the form of a sanctioning, while in fact, they are done due to the Prophet PBUH position as a normal human being. May Allah SWT gives us understanding in this religion as well as putting us in the ever after Paradise. Ameen.