IRSYAD AL-HADITH SERIES 504: FAIR MAIDENS FOR THOSE WHO SUPPRESSED THEIR ANGER 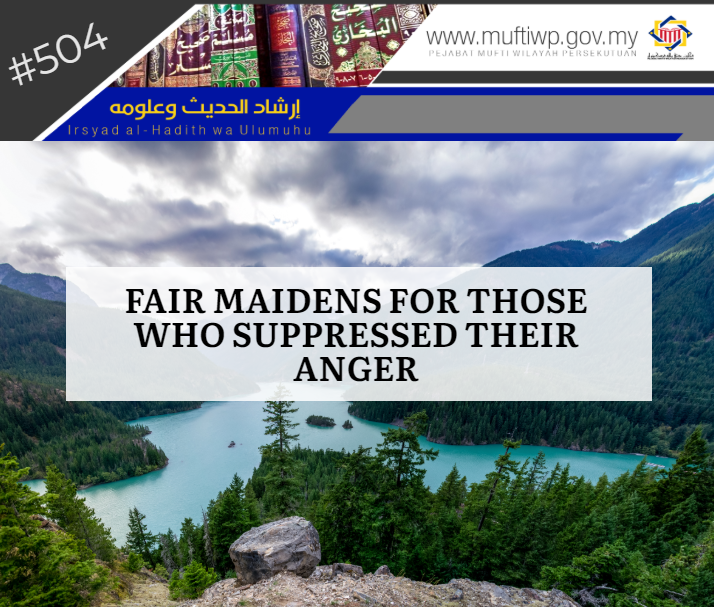 Is it true that there is a hadith which states that fair maidens are promised to those who suppress their anger?

The sadith which states on fair maidens for those who suppress or manage their anger is a hassan hadith. There are also several hadiths on the advantages of suppressing anger because anger is the source of immorality.

Even in al-Quran, Allah SWT acknowledges and recognize that His beloved servant, the Prophet PBUH is the best example to be followed by all His servants through His saying:

Who spend [in the cause of Allah] during ease and hardship and who restrain anger and who pardon the people - and Allah loves the doers of good;

Sheikh Dr Wahbah al-Zuhayli when commenting on this verse said that among the characteristics of pious people is hiding (suppressing) his anger as well as controlling himself from hurting others even when he is able to do so. This is based on the Prophet PBUH’s saying (as narrated by Imam Abu Dawud with the status of hassan): “Whoever suppresses his anger while being able to vent it, Allah will fill his heart with peace and faith.” [See: Tafsir al-Wasith, 1/238]

Besides, indeed there are hadiths which state that the reward for those who suppress their anger is fair maiden as narrated by Imam Abu Dawud in his Sunan:

It is narrated from Muaz bin Jabal RA that the Prophet PBUH said:

If anyone suppresses anger when he is in a position to give vent to it, Allah, the Exalted, will call him on the Day of Resurrection over the heads of all creatures, and ask him to choose any of the bright and large eyed maidens he wishes

This hadith means those who suppress their anger will be introduced to all humans and are praised extensively to the extent of being said to them that it is due to their great attribute (which is the suppression of their anger). Therefore, they are given the choice to choose any fair maidens they want. At the same time, it is also a kinayah (metaphor) for them to enter Paradise filled with rewards and high ranks.

In conclusion, the hadith that states on the rewards of fair maidens for those who suppress or control their anger is a hassan hadith. There are several hadiths stating the advantages of suppressing anger because this feeling is the source of immorality in it. Lastly, let us try to be a Muslim who has good conduct and character by making the Prophet PBUH as the best role model. Ameen.