IRSYAD AL-HADITH SERIES 505: PROHIBITION ON SQUEEZING IN BETWEEN OTHERS 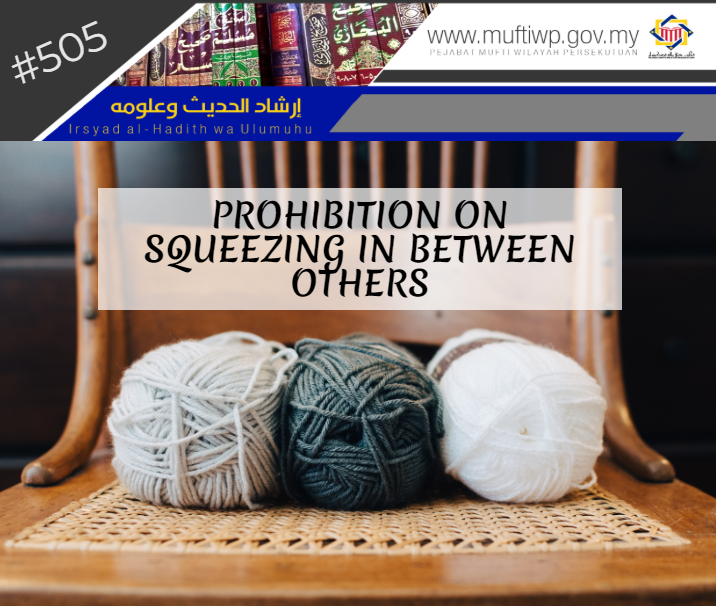 Is it true that there is a hadith that prohibits squeezing in between two persons who are sitting?

Hadith explaining on the prohibition of squeezing in between two persons who are sitting is a hassan hadith. It is to avoid any unpleasant feelings, hatred, animosity and etc. among humans. Hence, this religion prohibits such acts unless if one got permission to do so.

Each believing man and woman is encouraged to follow praiseworthy attributes. This is because, Islam highly emphasizes on the beauty of upright attitudes. Therefore, among the examples why the Prophet PBUH was sent to humans as a whole is to perfect good character. This is mentioned in a sahih hadith narrated by Abu Hurairah RA where the Prophet PBUH said:

“Verily, I was sent to perfect good character.”

In addition, the Prophet PBUH taught us the upright morals which nurture love and he PBUH prohibits from doing actions that may raise animosity and hatred.

Based on the above question, we would like to start this article with a hadith narrated by Imam al-Tirmidhi and Imam Abu Dawud in their Sunan:

"It is not lawful for a man to separate two people except with their permission."

The scholars state while commenting on this hadith that among the cause of the prohibition is that probably there is a family relationship among them, a secret to be discussed or an amanah to fulfil. So, separating them by squeezing in may burden them both. [See: Mirqat al-Mafatih, 7/2976, Tuhfah al-Ahwazi, 8/23 dan ‘Aun al-Ma’bud, 13/133]. Besides, Imam al-Nawawi put this hadith under the chapter of ethics to sit in a religious class and people who attend it. [See: Riyadh al-Solihin, 1/438]. Besides, Imam Ibn Ruslan al-Shafi’e stated that probably, this prohibition is only during the early period of Islam in which the munafiq (hypocrites) sat together with the mu’min (true believers) at that time and there is concern that the action may expose or reveal the believers’ situations. [See: Sharh Sunan Abi Dawud, 18/549]. This hadith also shows that Islam highly emphasizes on ethics and how to communicate with others by preserving the ethics in a particular event.

In conclusion, the hadith which state the prohibition of squeezing in between others who are sitting is a hassan hadith. It is for the purpose of avoiding any unpleasant feelings, hatred, animosity and etc. among humans. Hence, the religion prohibits this action unless one got the permission to do so. Lastly, may Allah SWT give us strength in practising the Islamic ethics as well as protect us from committing something reprehensible by the religion. Ameen.