IRSYAD AL-HADITH SERIES 508: ANSWERING THE SYUBHAH THAT THE PROPHET PBUH’S SUFFERING BEFORE PASSING AWAY IS DUE TO SAYING LIES 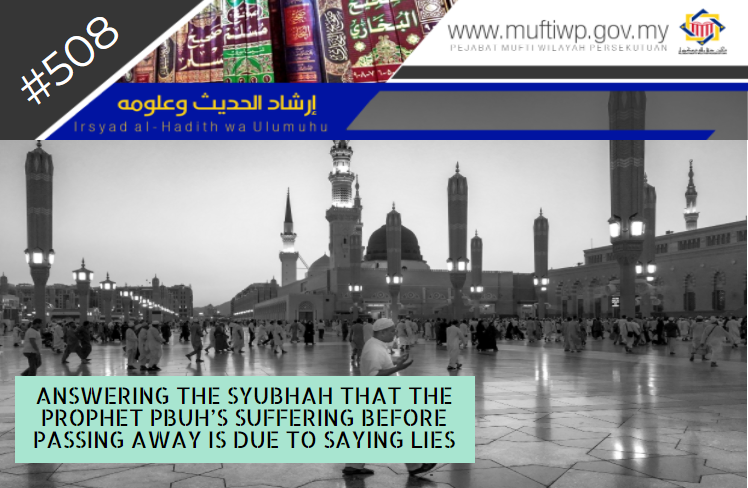 Is there a relation between verse 46 of Surah al-Haqqah and the hadith which dictates that the Prophet PBUH’s suffering before passing away is due to eating poisoned meat in Khaibar?

Brief Answer: Syubhah on the Prophet PBUH’s suffering before passing away is due to saying lies is a syubhah brought by a group of people who hate Islam and it is of no basis at all. This is because, both texts of the Quran and hadith presented are in two different contexts. History has proven that the Prophet PBUH had never say lies in his entire life and he is very trustworthy in spreading the teachings of Islam.

To answer the above question, we would like to bring upon the saying of Allah SWT and the Prophet PBUH:

And if Muhammad had made up about Us some [false] sayings, (44) We would have seized him by the right hand; (45) Then We would have cut from him the aorta. (46)

In the hadith, there is a telling on the suffering felt by the Prophet PBUH when he is passing away which is as if his PBUH’s veins are all bursting out. This is in accordance with the narration of Aisha R.anha where she said:

"O `Aisha! I still feel the pain caused by the food I ate at Khaibar, and at this time, I feel as if my aorta is being cut from that poison."

Therefore, we would like to answer this syubhah and confusion with some points:

Allah SWT say in the Quran:

Nor does he speak from [his own] inclination.

Second: The Prophet PBUH passed away three years after he PBUH ate the poisoned mutton served by a Jew lady. This is mentioned by Imam Ibn al-Qayyim:

“Indeed, the Prophet PBUH ate the meat (poisoned) and he PBUH lived for three years (after the event) until he PBUH got sick and passed away due to that.” [See: Zad al-Ma’ad, 3/298]

In the above verse of al-Quran, it is clear that Allah SWT will punish him directly if he PBUH was lying. However, the pain felt by the Prophet PBUH was three years after he ate the poisoned mutton.

Third: Vein which is bursting mentioned in the Quran and hadith are different types of vein through lexical context.

Referring to both meanings, this shows that there is absolutely no similarity between these two and his PBUH’s words when he was dying is merely a kinayah (analogy) to highlight on the pain he faced. The usage of this kinayah is very famous and commonly used by the Arabs. Besides, al-Quran also is not excluded in using this uslub or method of kinayah.

In conclusion, referring to the above, it is clear to us that the claim brought by those who hate Islam has no basis at all. This is because, verses of al-Quran and sayings of the Prophet PBUH presented are in two different contexts. History has proven that the Prophet PBUH never said lies in his entire life and he PBUH is the most trustworthy person in spreading the teachings of this religion. This is narrated by Imam al-Bukhari in his Sahih: [See: Sahih al-Bukhari (4770), 6/111]

It is narrated from Ibn Abbas RA, he said:

When the Verse:--'And warn your tribe of near-kindred, was revealed, the Prophet (ﷺ) ascended the Safa (mountain) and started calling, "O Bani Fihr! O Bani `Adi!" addressing various tribes of Quraish till they were assembled. Those who could not come themselves, sent their messengers to see what was there. Abu Lahab and other people from Quraish came and the Prophet (ﷺ) then said, "Suppose I told you that there is an (enemy) cavalry in the valley intending to attack you, would you believe me?" They said, "Yes, for we have not found you telling anything other than the truth." He then said, "I am a warner to you in face of a terrific punishment." Abu Lahab said (to the Prophet) "May your hands perish all this day. Is it for this purpose you have gathered us?" Then it was revealed:

"Perish the hands of Abu Lahab (one of the Prophet's uncles), and perish he! His wealth and his children will not profit him...."

Before we end this article, we would like to present the saying of Allah SWT in the Quran:

Muhammad is not but a messenger. [Other] messengers have passed on before him. So if he was to die or be killed, would you turn back on your heels [to unbelief]? And he who turns back on his heels will never harm Allah at all; but Allah will reward the grateful.

Lastly, may this brief explanation able to refute the wicked syubhah upon our honored Prophet PBUH as well as give us some understanding in deepening our faith so that we may not easily be shaken by such claims. Ameen.