IRSYAD AL-HADITH SERIES 514: THE BEST EXPRESSION TO AN AFFLICTED PERSON 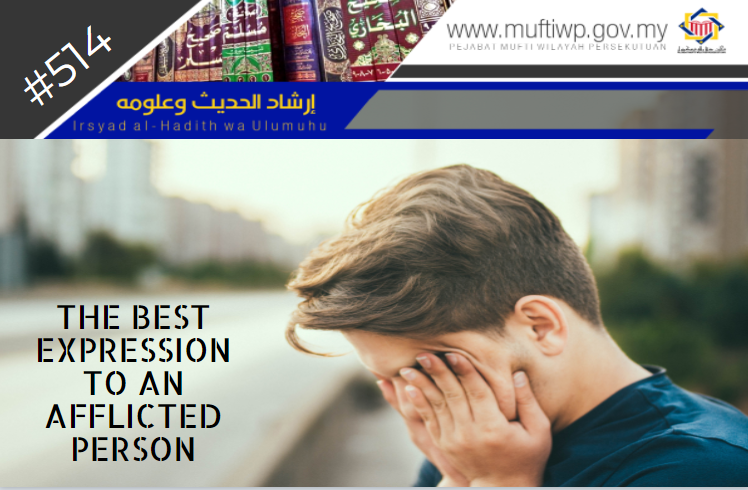 Is there a guidance from the Prophet PBUH when seeing a people facing calamity?

The above hadith is a hadith recorded by al-Tirmidhi and is evaluated as hassan. It can be practiced when we see people facing calamity. ‘Do aini’ may be said when one is tested with sinful acts or tested with fasiq actions. While if a person is tested with sickness or physical disability, this saying is not appropriate. Besides, we are commanded to always be grateful for every blessings of Allah bestowed to us.

Among the purposes Allah SWT test His slaves is to see who among them have patience and practice good deeds. In addition, each calamity ensued by Allah SWT is different depending to the capability of each servant of Him.

Based on the above question, there is a guide from the Prophet PBUH on a du’a taught by him when witnessing afflicted people.

“Whoever sees an afflicted person then says: ‘All praise is due to Allah who saved me from that which He has afflicted you with, and blessed me greatly over many of those whom He has created, (Al-ḥamdulillāhi alladhī `āfānī mimmabtalāka bihī wa faḍḍalanī `alā kathīrin mimman khalaqa tafḍīla)’ he shall not be struck by that affliction.”

Imam al-Tibi said when commenting on this hadith, this saying (du’a) can be recited to a person who is tested with sinful acts (sinners) or tested with fasiq actions (be continuous in minor sins). While when a person is tested with sickness or physical disability, it is not appropriate to say such words. (See: Tuhfah al-Ahwazi, 9/276)

Besides, Imam al-Nawawi stated on this hadith in his book in which the scholars encouraged that this du’a to be recited in soft recitation that will only be heard by oneself and not the afflicted person as to not hurt his feelings unless the test is a sin (sinners), so it is not wrong for us to louden the recitation (saying) if it does not hurt him. (See: al-Azkar, 303)

Among the wisdom of permissibility of such expression or du’a for the sinners is for them to be affected by the du’a once they hear it, then due to that he will abandon his sins.

In conclusion, the above hadith is hassan and can be practiced when we see an afflicted person. Besides, we are also commanded to always be grateful for all our blessings bestowed by Allah SWT. Lastly, may Allah SWT give us understanding in this religion as well as protecting us in the world and the hereafter. Ameen.