IRSYAD AL-HADITH SERIES 208: THE MANNERS AND ENCOURAGEMENT OF WEARING SANDALS 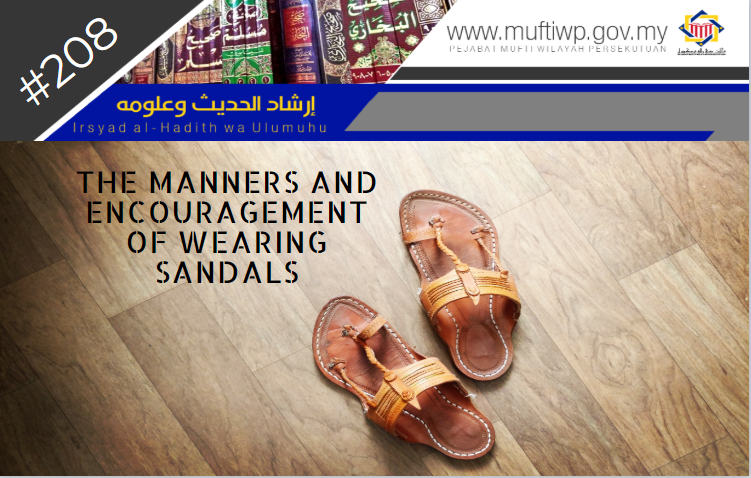 Assalamualaikum SS Datuk Mufti. Is there an encouragement to wear sandals from the hadith?

Islam is a religion that emphasizes cleanliness from both physical and spiritual aspects. The reason is Allah SWT loves His slaves who are clean and this is stated in the Quran:

Imam al-Baghawi in his commentary stated that purify in the above verse means pure from hadas (minor or major), janabah and najis. Al-Atha’ said, they are from those who purify themselves with water and do not sleep in the state of janabah (major hadas).

“Make a general practice of wearing sandals, for a man is riding as it were when he wears sandals.”

The Meaning of Hadith

According to Imam al-Nawawi, the meaning of the hadith is a comparison with a person who is riding of which it eases his hardship and tiredness, protecting his feet from harm of the road such as thorns, roughness or jaggedness of the surface of the road and other harms. It is also sunnah for a traveller to wear sandals or other type of footwear needed for travels. Furthermore, it is also sunnah for a leader to remind his companions about this. (See al-Minhaj Syarh Muslim, 73/14)

Thus, it can be understood from the hadith of the Prophet PBUH that it is encouraged to wear sandals or other footwear when a person is going somewhere to protect his feet.

Among the manners encouraged by the Prophet PBUH when wearing sandals are:

The prophetic guidance from this hadith are divided into several parts:

Furthermore, the Prophet PBUH restricts us from walking with just one sandal. This is narrated in a hadith:

“Do not walk in one sandal,”

Imam al-Nawawi stated that the ruling of walking in just one sandal is makruh (undesirable). If the rope (which hold the sandals and toes together) breaks, then do not walk with just one sandal (which isn’t broke) until you repair the broken sandal. (See al-Minhaj Syarh Muslim, 75/14)

To conclude, this shows that Islam is a religion that emphasizes on every aspect of life including clothing. Lastly, may Allah SWT give us the strength and understanding in practising the sunnah of the Prophet PBUH. Amin.