IRSYAD AL-HADITH SERIES 206: THE IMAM TURNING AWAY AFTER PRAYER 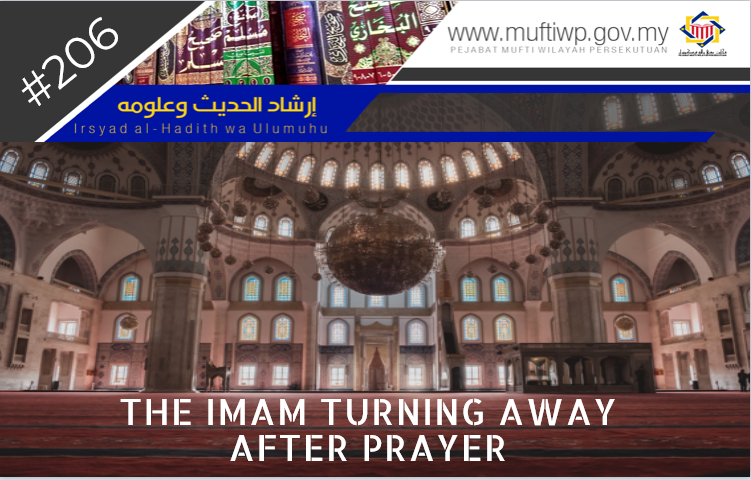 Assalamualaikum. Is there evidence which states on imam turning away after prayer?

Waalaikussalam wrt. wbt. Alhamdulillah, praise and thanks to Allah for the countless blessings He has blessed us all with. Blessings and salutations to the Prophet Muhammad PBUH, his wives, his family, companions and all those that follow his teachings to the day of judgement.

According to the above question, there is a hadith which narrates the Prophet PBUH did just that after his prayer.

“When he had prayed, he turned to face us,”

“When we prayed behind the Messenger of Allah (ﷺ) we cherished to be on his right side so that his face would turn towards us (at the end of the prayer),”

Imam al-Hafiz Ibn Hajar said the hadith from Samurah apparently shows that the Prophet PBUH always did turn towards the ma’mum. It is said that among the wisdoms of facing towards the ma’mum is to teach them what they needed from him. Thus, this matter is specific for those who are there when the Rasullullah PBUH are about to teach or remind them. Moreover, it is also said that among the wisdoms is so that the people in the mosque would know that the congregational prayer has ended. If the imam remains in his position (facing the qibla), then it would depict (gave a wrong impression) as though he (the imam is still praying) is in the tasyahhud position. (See Fath al-Bari, 334/2)

"O Allah, You are as-Salam (One Free from every defect), and as-Salam (safety from every evil) is (sought) from You. Blessed are You, O Possessor of glory and honour.”

Thus, we would like to state that it is sunnah for an imam to turn towards his ma’mum whether it is to his right or left or the faces of the ma’mum after reciting some of the dhikr right after prayer.

Furthermore, it is stated in the book al-Muktamad that this is an important matter to be done especially after obligatory prayer for there is a concern that someone would sit together with the imam thinking that the imam is still praying. Thus, this is fulfilled when the imam turns towards the ma’mum or by the imam turning and the turning away of a person from qibla. (See al-Muktamad fi Fiqh al-Syafie, 316/1)

To conclude, for an imam, he should turn away after prayer for it is a sunnah and the Prophet PBUH always did so. Lastly, may Allah SWT grant us the strength and understanding in practising the sunnah of the Prophet PBUH. Ameen.