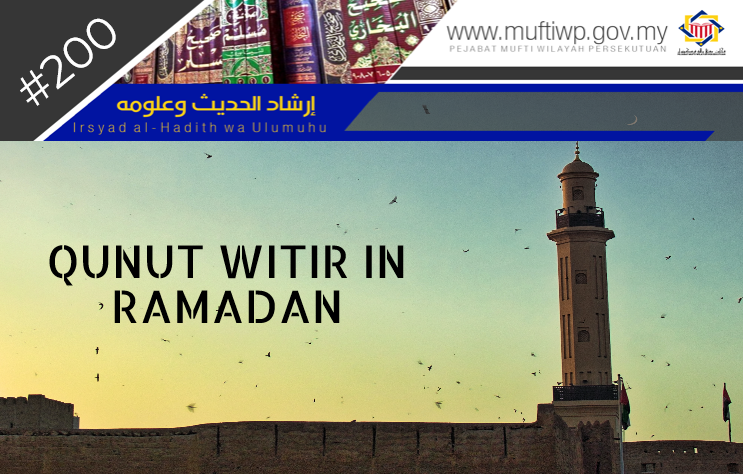 Assalamualaikum. What is the evidence which states that it is sunnah to recite qunut in witir after the 15th last nights of Ramadhan?

According to the above question, there is a hadith narrated by Hasan bin Ali RA in Jami’ al-Tirmizi and also in Sunan Abi Daud:

"Allah's Messenger taught me some phrases to say during Al-Witr 'O Allah guide me among those You have guided...'"

In madhhab al-Syafie, it is sunnah for an imam or a person praying alone to recite qunut in the last rakaat of Witir prayer and it is recited on the 15th last nights of Ramadhan. (See al-Muktamad, 1/309)

The following is Qunut supplication as stated in Sunan Abi Daud:

Furthermore, it is also sunnah to recite the praise and salutations for the Prophet PBUH after reciting the above supplication as stated by Imam al-Nawawi RA in al-Azkar. Moreover, it is sunnah for a person praying alone or the imam if they wish to lengthen the qunut supplication by reciting the lengthy qunut supplication of Umar al-Khattab RA and we will include parts of it and it is also recorded in the book al-Azkar by Imam al-Nawawi RA:

“O Allah our Lord, we ask of thee Your help, we seek Your forgiveness and we did not disbelieve, we believe in You and we hate those who disobeyed You. O Allah our Lord, only towards You we prostrate ourselves to and only for You we pray and prostrate…”

To conclude, we close this discussion with the words of Imam al-Nawawi RA; if a person supplicates with any du’a whether with a verse or several verses from the Quran which encompasses the meaning of supplication, then he is considered as has recited qunut. However, it is prioritized to recite the supplication in and taught in the sunnah of the Prophet PBUH. The reason is an imam should first consider his makmum before lengthening the recitation of supplication as to not burden the people who are following him. Lastly, may Allah SWT accept all our deeds in this honoured month and make us from among the people who enter His paradise. Amin.