IRSYAD AL-HADITH SERIES 194: GLORIFYING A TEACHER IS LIKE GLORIFYING GOD 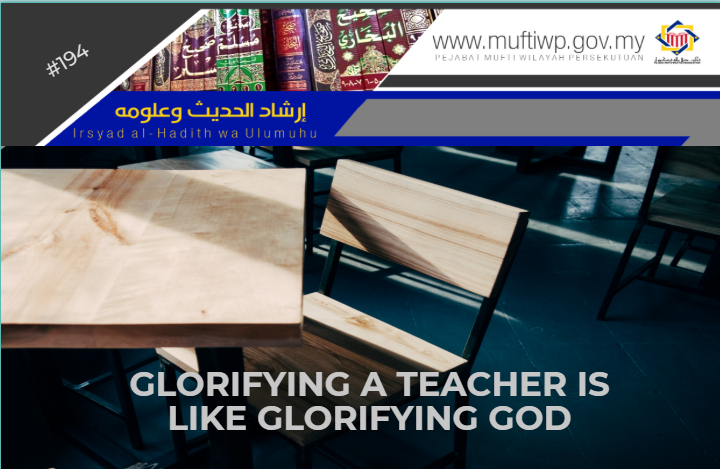 What is the status of a hadith which states that whoever glorifies his teacher is the same as glorifying his God?

The Text (matan) of the Hadith

Narrated by Aishah RA, it is recorded that the Prophet PBUH said:

“Whoever glorifies a scholar, then he has glorified his God,”

The Ruling of the Hadith

Among the scholars who evaluated the hadith:

In our opinion, the above hadith is fabricated and cannot ever be said as a narration of the Prophet PBUH. However, the meaning of the hadith is true and does not contradict with what is taught in this religion. This is in accordance with the Allah SWT’s saying:

“Only those fear Allah, from among His servants, who have knowledge,”

Furthermore, we include some texts of popular hadith which are narrated from the Prophet PBUH regarding glorifying scholars and those with knowledge:

“Whoever glorifies those with knowledge/scholars, then he has glorified 70 prophets”

From Jabir bin Abdillah RA, it is said the Prophet PBUH said:

“Honor the scholars for they are the heirs of the prophets. Whoever glorifies them, then he has glorified Allah and His Messenger.”

Narrated by Abi Darda’ RA, where the Prophet PBUH said:

“Verily, the learned are the heirs of the Prophets”

These are some hadiths which are popular and well spread among our society these days. Here, we would like to state that we are inclined to say that the first and second hadith are so weak (dhaif) in the aspect of their sanad because they both contain narrators who are problematic and highly criticized by the scholars. Therefore, we cannot claim these two as the sayings of the Prophet PBUH. However, regarding the third or the last hadith, we would like to state that it is hassan with enough syawahid which strengthens one another.

In conclusion, there are many verses of the Quran and Sunnah which emphasize on the virtues of the learned or knowledgeable people as well as the virtues of those who give knowledge to others that we have mentioned in our past articles on the virtues of seeking knowledge. Before we end this article, we would like to share words of one of the prominent figures and a great imam in Islamic madhab:

Lastly, may Allah SWT give us understanding in this religion as well as preserving our tongues from falsehoods in the name of the Prophet Muhammad PBUH. Ameen.