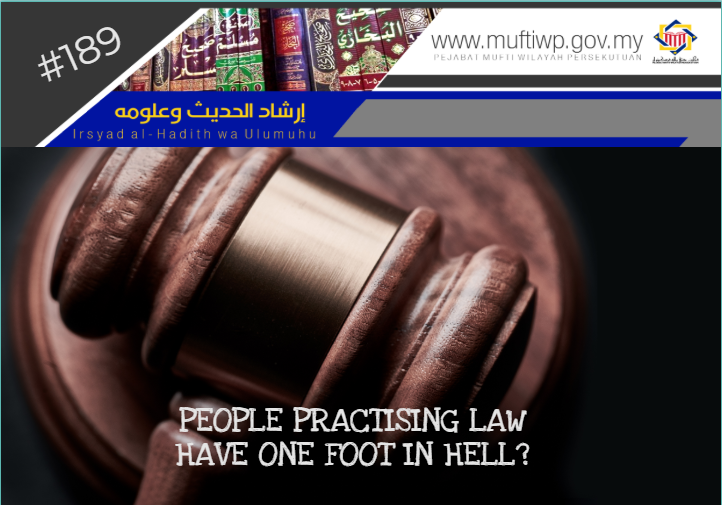 Assalamualaikum SS Dato’ Seri Mufti. Is it true that whoever study and practices law has one foot in hellfire?

In answering the above question, we do not find any hadith that state anyone studying or practising law, whether he is a lawyer or a judge, already has one foot in hellfire after thorough research. However, there is a hadith that have similar meaning to it as the following:

The above hadith explains that a qadhi (judge) can never be successful in avoiding the hellfire except for those who has knowledge and apply the knowledge that they have. Applying his knowledge (with known truth) is vital for whoever that knows the truth, however, not practising what he knows and whoever who is ignorant will both end up in hellfire. Clearly, even if an ignorant person passes a judgement which coincidently is the right judgement, he too will end up in hellfire because he sentenced someone without the right and true knowledge or with something that contradicts with what he knows. (See ‘Aun al-Ma’bud, 353/9)

As a conclusion, passing judgement is a great and heavy responsibility, especially when it involves the dignity of someone. However, for someone who has put in all his effort and mental capabilities to come up with an ijtihad according to his abilities, even if the ijtihad in inaccurate, Allah SWT will still reward him for his efforts. If someone come up with an ijtihad and it is the correct, then he will receive double rewards from Allah SWT. Lastly, may Allah SWT make us among His slaves who has taqwa for justice is nearer to taqwa as stated by Allah SWT. Amin.