IRSYAD AL-HADITH SERIES 188: THE RULING OF TAKING A BATH DURING THE NIGHT 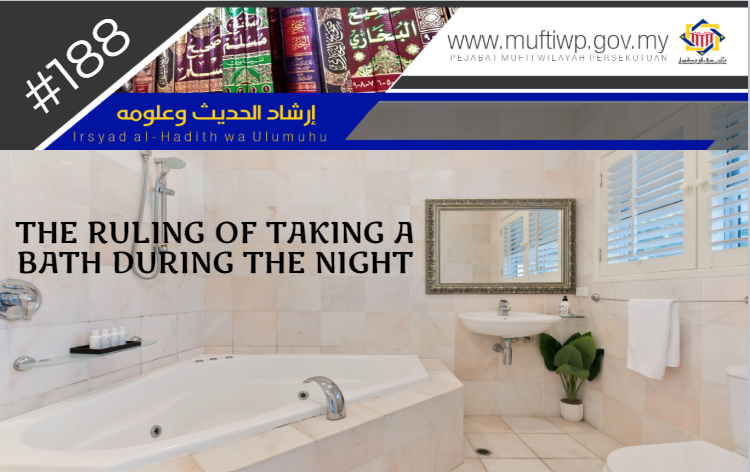 Assalamualaikum Dato. Is there any evidence from the Quran, hadith or athar regarding the restriction of taking a bath during the night?

Islam is a religion that emphasizes cleanliness and Allah SWT love His slaves who are clean. Bathing is one of the ways to clean oneself. Furthermore, Allah SWT also commanded us to take a bath as stated in the Quran:

According to the above question, we did not find any verses in the Quran, hadith or athar from the companions of the Prophet PBUH regarding any restriction against bathing during the night. Hence, it is permissible for us to take a bath anytime we wanted, for there is no restriction on taking a bath at night time. However, there are several opinions from scholars who state that it is makruh (undesirable) to take a bath when the sun is setting and in between the two isyak (between maghrib and isyak time). This is stated in Mughni al-Muhtaj:

“And it is makruh to enter it (bathroom) when the sun is setting and in between the two isyak (between maghrib and isyak), for it is the time the shaytan are roaming.” (See Mughni al-Muhtaj, 224/1)

Reviewing the above statement, it is best for us to avoid entering the bathroom during both specified times unless if there is a necessity. Furthermore, bathroom or bathing is a necessity for every human such as when they need to urinate and perform the obligatory bath.

Wisdom of the Sanctioning of Bath

Purification meant in the above hadith includes ablution and taking a bath.

When a Muslim takes a bath, he will be cleansed from any dirt or impurity stuck on his body or sweat that is excreted from his body. A clean body will prevent bacteria and germs from thriving on his body which could lead to diseases. Someone who is clean and smells good would make others around him comfortable and nurture the feelings of care and compassion.

This is in accordance with a hadith from Aisyah RA, where she said:

“The people (mostly) were workers and they had no servants. Ill-smell thus emitted out of them. It was said to them: Were you to take bath on Friday.” In another narration by al-Bukhari and Muslim, the Prophet PBUH said: “Were you to cleanse yourselves on this day (Friday).”

Taking a bath will make one more energetic and active, relieving one from tiredness and laziness especially when it is obligated for him such as after intercourse.

As a conclusion, here we reiterate that there is no evidence from the Quran and sunnah that restrict bathing at night time. Lastly, may Allah SWT make us from among His slaves who are always mindful and take care of their cleanliness. Amin.