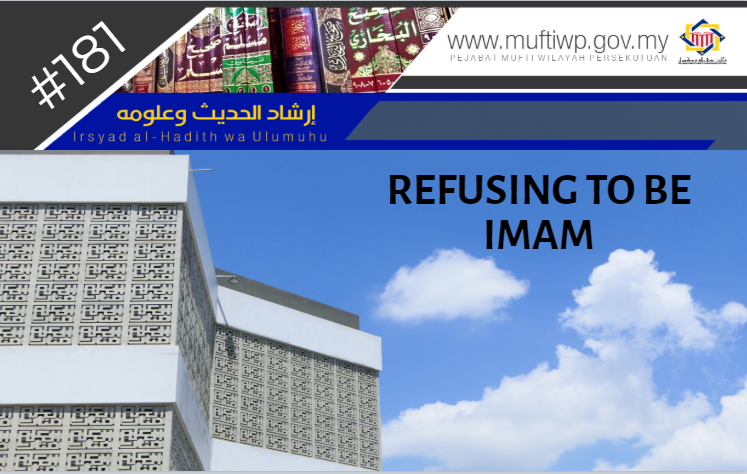 “Among the signs of the Last Hour is when people are refusing to be imam.”

According to the above hadith, we did not find any hadith with the same text in muktabar (renown and acknowledged) hadith books such as kutub sittah. However, we did find the hadith in the books that gather fake hadiths. Among the scholars that commented on the hadith are:

Furthermore, Syeikh Abdul Fattah Abu Ghuddah explained in his commentary of the hadith stating that when a man is asked to be an imam, he refuses to do so. Then, when another person is asked to be the imam, he also refuses and so on.

However, there is another hadith that has a similar meaning with the above hadith, as stated in Sunan Abi Daud in chapter “It Is Disliked to Refuse the Position of Imam”:

“One of the signs of the Last Hour will be that people in a mosque will refuse to act as imam and will not find an imam to lead them in prayer.”

Furthermore, in Sunan Ibn Majah there is another hadith that carries the similar meaning with the above hadith:

“A time will come when the people will stand for a long time and will not be able to find any Imam to lead them in prayer.”

To conclude, the position of imam is an honour in Islam. This is stated in Jami’ al-Tirmizi:

"There shall be upon dunes of musk- I think he said: On the Day of Judgment- a slave who fulfils Allah's right and the right of his patron (master), a man who leads a people (in prayer)) and they are pleased with him. And a man who calls for the five prayers during every day and night."

Hence, an imam should be someone who is responsible and trustworthy. Furthermore, an imam must prepare himself with ample religious knowledge. Lastly, let us all avoid this attitude (refusing to be the imam) and may Allah SWT guide and bless us. Amin.