IRSYAD AL-HADITH SERIES 173: THE TRUTH OF THE STORY OF THE PROPHET PBUH AND A BLIND JEW 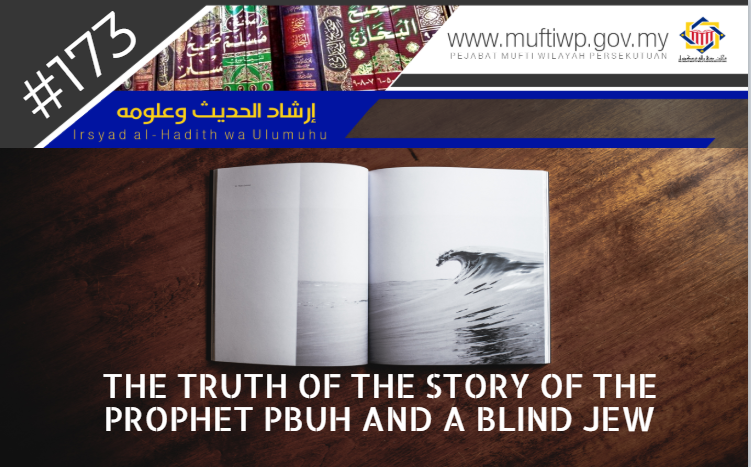 Assalamualaikum SS Dato’ Seri Mufti. What is the status of the hadith regarding the story of the Prophet PBUH and a blind Jew?

According to the above question, there are several stories that recount incidents between the Prophet PBUH and a blind Jew. Among the famous story that we often hear is:

After analysing this story and trying to find to find the source and validate the story, we did not find the original source of this story. Thus, we state that this story should not be spread to others for it does not come from the Prophet PBUH.

There is a sahih hadith about an incident that happened between the Prophet PBUH and a young Jew boy. This is narrated by Imam al-Bukhari in his book Sahih al-Bukhari:

“A young Jewish boy used to serve the Prophet (ﷺ) and he became sick. So the Prophet (ﷺ) went to visit him. He sat near his head and asked him to embrace Islam. The boy looked at his father, who was sitting there; the latter told him to obey Abul-Qasim and the boy embraced Islam. The Prophet (ﷺ) came out saying: "Praises be to Allah Who saved the boy from the Hell-fire."

To conclude, there are numerous narrations regarding the Prophet PBUH that is discussed in sermons and lectures. However, we should verify the truthfulness of something before stating that it comes from the Prophet PBUH, for it is considered as a deception done unto our beloved Prophet PBUH. Lastly, may Allah SWT bless us with good character and conduct, the same as our beloved PBUH who are loved by all, regardless of race or religion. Amin.