IRSYAD AL-FATWA HAJJ AND SACRIFICE (QORBAN) SERIES 4: THE RULING OF GIVING THE MEAT OF ANIMAL SACRIFICE TO THE NON-MUSLIMS 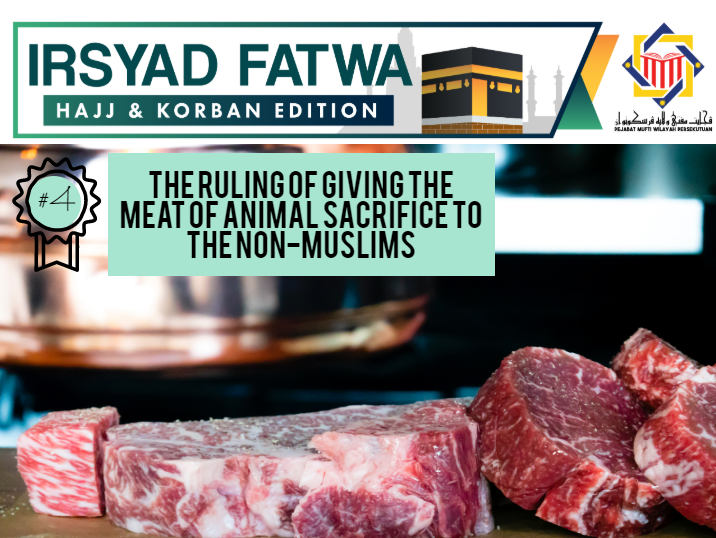 What is the ruling of giving non-Muslims the meat of animal sacrifice (qorban)?

“Then eat from them and feed the needy and the beggar. Thus, have We subjected them to you that you may be grateful.”

Al-Imam Ibn Kathir Rahimahullah in Tafsir al-Quran al-‘Azim (5/428) commented on the above verse stating, some of the salafs said that it is permissible to eat some of the sacrificed animals. Al-Imam Malik Rahimahullah said that it is sunnah to eat from the sacrificed animal and some even said it to be an obligation according to some of al-Syafi’eyyah scholars.

Al-Imam al-Nawawi Rahimahullah mentioned in al-Majmu’ that al-Imam Ibn Munzir Rahimahullah said that according to the consensus of scholars, it is permissible to feed the poor who are among the Muslims from the meat of animal of sacrifice and the only khilaf (difference of opinions among scholars) is whether it is permissible to distribute it to the poor from among the non-Muslims of ahl al-zimmah.

In our opinion, for this particular issue, the aspects of maslahah and Siyasah syar’iyyah should be taken into consideration in order for it to be an important tool of dakwah to our non-Muslim society.  Here, we state:

The reason is, there is evidence from the Quran that commands us to do good to other non-Muslims. Allah SWT states:

“Allah does not forbid you from those who do not fight you because of religion and do not expel you from your homes - from being righteous toward them and acting justly toward them. Indeed, Allah loves those who act justly.”

Giving the meat of animal sacrifice is also considered as doing good and being righteous to the non-Muslims which is permissible according to Allah SWT.

Furthermore, there is also another hadith which states that we should do good to our neighbours, regardless of whether they are Muslims or not. The hadith is from Abdullah bin ‘Amr al-‘As R.Anhuma; Mujahid said that Abdullah ibn Amr slaughtered a sheep and said: Have you presented a gift from it to my neighbour, the Jew, for I heard the Messenger of Allah (ﷺ) say:

“Gabriel kept on commending the neighbour to me so that I thought he would make them heirs.”

Hopefully, this explanation could give us some understanding of our religion and help us in practising the sanctioned worship of sacrifice in the coming month of Zulhijjah. Wallahua’lam.