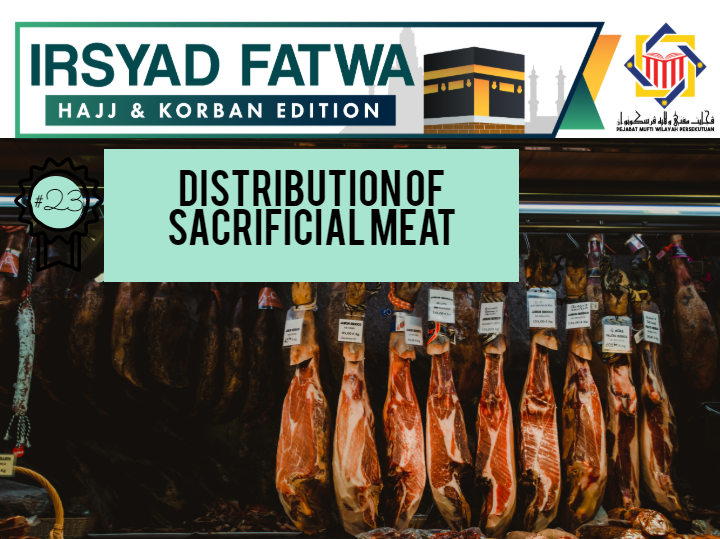 Assalamualaikum wbt, Dato’ Seri Mufti. Alhamdulillah, this year I am blessed with the opportunity and capability of performing the sacrifice. I want to ask, what is the prioritized way for me to distribute the sacrificial meat?

Hope to get an explanation from Mufti. Thank you.

Allah SWT sanctioned the worship of qorban to those who are able to perform it. The evidence of the sanctioning of qorban is the statement of Allah SWT in the Quran:

It is also stated in a hadith narrated by Anas Ibn Malik RA:

Sacrifice is sunnah muakkadah (highly encouraged sunnah) according to madhab Syafi’e. It is an eminence of Islam and an obligation for those who are able to perform it, maintaining its eminence. (Refer al-Mu’tamad fi Fiqh al-Syafie, 2:478)

Furthermore, it is also an obligation to donate the sacrificial meat to the poor and needy as stated by Allah SWT:

“So, eat of them and feed the miserable and poor.”

In answering the above question, we would like to state that the first thing to consider is whether the sacrifice is a sunnah sacrifice or obligatory sacrifice such as nazar or it has been decided as a sacrifice.

If the animal of sacrifice is for sunnah sacrifice, then it is sunnah for him to eat a portion of the sacrificial meat. It is also permissible for him to distribute it to others. This is in accordance with a hadith narrated by Jabir RA, where the Prophet PBUH performed sacrifice as the following:

“The Prophet PBUH slaughter 63 camels, then the Prophet PBUH give the rest of the animals to Ali Ibn Abi Talib to be slaughtered. Afterwards the Prophet PBUH asked that every camel is to be distributed to several people and is placed in a pot and cooked. Then, both of them eat the meat and gravy.”

Hence, the sacrificial meat can be distributed as the following:

“As for the distribution of sunnah sacrifice, one should donate the majority portion of it and leave a small portion for himself to eat as a blessing from it.” (Refer Syarh al-Yaqut al-Nafis: 826)

According to the above discussion, we conclude that if it is an obligatory sacrifice such as nazar sacrifice or a specified sacrifice, then it is obligatory for him to donate all of the sacrificial meat and it is prohibited for him to eat it.

Whereas, if it is a sunnah sacrifice, then it is prioritized for him to donate all of the sacrificial meat leaving just a small portion of it to be eaten following the commandment in the Quran and sunnah of the Prophet PBUH.

May Allah SWT bless us with guidance in practising the commandments in His religion the best we could. Amin.