IRSYAD FATWA HAJJ AND QORBAN (SACRIFICE) SERIES 24: IS IT PERMISSIBLE TO COMBINE BOTH NAZAR AND BADAL HAJJ? 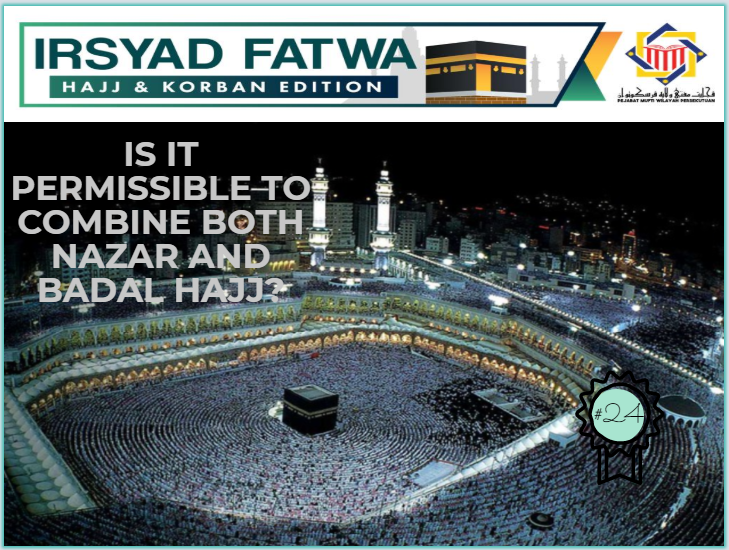 Assalamualaikum Dato’ Seri. I have a question regarding hajj. If a person already performs hajj, but set an intention of a nazar to perform it again, if what he intended did happen, then is it permissible for him to do badal hajj with the same hajj (nazar)?

Hajj is one of the pillars of Islam as stated in hadith narrated by Ibnu Umar RA, where he narrated that the Prophet PBUH said:

Allah's Messenger (ﷺ) said: Islam is based on (the following) five (principles): (1) To testify that none has the right to be worshipped but Allah and Muhammad is Allah's Messenger (ﷺ). (2) To offer the (compulsory congregational) prayers dutifully and perfectly. (3) To pay Zakat (i.e. obligatory charity). (4) To perform Hajj. (i.e. Pilgrimage to Mecca) (5) To observe fast during the month of Ramadan.

Hajj by Proxy is famously known as Badal Hajj. It is invalid to do so if the person himself is still able to perform it.

Imam Nawawi in his commentary stated: “Majority of the scholars (jumhur) said that it is permissible to do badal hajj upon a deceased and sick person who already has no possibility to be cured”. (Refer: Syarah al-Nawawi ala Muslim, 8/27)

Dr Wahbah al-Zuhaili in his book states that it is permissible for a person to do hajj on behalf of others in two conditions:

Also, it is permissible to perform hajj on behalf of the deceased or people with prolonged sickness in performing Sunnah hajj. (Refer: al-Fiqh al-Islami wa adillatuhu, 3/2098)

This is as a hadith narrated by Abu Razi al-Uqaili, where he said:

Requisites for Those Who Perform Hajj on Behalf of the Others

It is requisite for a person who is doing badal hajj for others to have already performed hajj. It is impermissible to do so if he has not yet performed his obligatory hajj, replaced or nazar hajj.

This is as stated in a hadith where Ibnu Abbas reported that The Prophet PBUH heard a man says:

Nazar means when one obligates oneself to perform any acts which drive himself towards Allah SWT. Syaikh Muhammad al-Zuhaili defines nazar in his writing:

Obligates oneself towards qurbah actions (be closer to Allah SWT) which is not indicated by syara’, either by absolute obligation or ta’liq (bound together) with specific acts.

In al-Fiqh al-Manhaji, nazar is defined as, setting iltizam (aspiration) to perform any non-obligated noble acts whether they are bound together with any specific actions or not. (Refer: al-Fiqh al-Manhaji ala Mazhab al-Imam al-Syafie, 3/21)

Nazar is one of the actions which are sanctioned by Allah. It is stated in the Quran:

“and fulfil their vows”

For nazar of performing hajj, he has to do it himself if he is capable to do so. If not, then he has to seek the help of others to perform it on his behalf even with wage. This is as the obligation of obligatory hajj which is performed by others in cases where he is unable to do so. (Refer: al-Fiqh al-Manhaji ala Mazhab al-Imam al-Syafi’e, 3/28)

Syeikh Muhammad al-Zuhaili stated, “Whoever sets a nazar of performing hajj, then he is obligated to fulfil it. However, if he is sick and being unable to perform the hajj while also being old, then it is permissible for him to request others to perform it on his behalf upon his permission. (Refer: al-Mu’tamad fi al-Fiqh al-Syafi’e, 2/514)

Based on the question and evidence stated before, it is concluded:

This is as what was stated by Imam al-Nawawi:

“It is impermissible to perform obligated badal hajj and nazar hajj at the same time, as a person is not permitted to do two obligatory acts in one time”. (Refer: al-Mausu’ah al-Fiqhiyyah al-Kuwaitiyah, 42/35)

Hence, it is impermissible to perform nazar hajj while also performing badal hajj for others.

May we be guided with true understandings in performing the acts of worship.

Besides, you may also refer to the articles: