IRSYAD AL-FATWA HAJJ AND KORBAN EDITION SERIES 51: WHICH ONE IS PRIORITISED; DOING KORBAN OR HELPING THE POOR DURING THIS COVID-19 PANDEMIC? 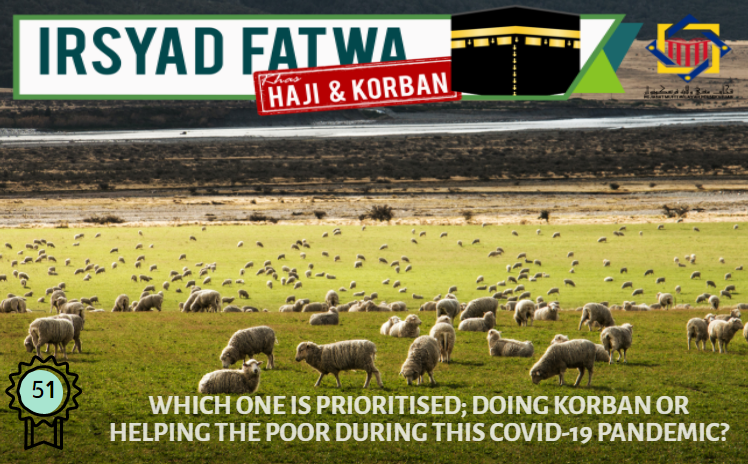 Assalamualaikum wbt. I would like to ask, during this pandemic, many people are affected badly. So which one is prioritized between doing korban or helping the poor?

Doing korban is the most prioritized of all other deeds on the day of Eid al-Adha and 3 tashriq days based on the hadith of the Prophet PBUH. This is the original Fiqh ruling on a normal setting. However, during this outbreak, for those who are only capable of doing korban, then giving sadaqah with the same amount as the korban is prioritized than doing the korban itself.

However, for those who are capable, it is advised to not leave the korban because the original rule for korban is still afdhal for them and so that the eminence of korban will not fade as well as keep on giving sadaqa to the poor so they will not short on staple food.

The Covid-19 pandemic has badly affected the economy and social state of the society. Nowadays, we see all around us people who lose their jobs and those who are hindered from going out to work due to the restriction imposed on many sectors which makes them unable to operate as usual. Many parties whether individuals or government agencies provide some aids in the form of food bank, cash money and etc. to help lifting the burden as well as to provide for those who are in need.

The coming of this Eid al-Adha for this year raises some questions towards the society; which one is prioritized between keep on providing the aid towards the poor and needy or doing korban?

Korban is the most prioritized ibadah to be done on the day of Eid al-Adha and the 3 tasyriq days (the 10th, 11th, 12th, and 13th of Zulhijjah). This is based on a hadith narrated from Saidatina Aisyah R.Anha that the Prophet PBUH said:

"A human does no action from the actions on the day of Nahr more beloved to Allah then spilling blood (of sacrificial animals). On the Day of Judgement, it will appear with its horns, and hair, and hooves, and indeed the blood will be accepted by Allah from where it is received before it even falls upon earth, so let your heart delight in it.”

This hadith shows that the most prioritized ibadah to be done on Eid al-Adha is by shedding the blood or korban. This is because it (the slaughter animal) will come on the Day of Judgement without any defect and each body part will bring reward. Besides, it will also become a ride for those who made them as korban when they are passing the sirat. (Refer: Tuhfah al-Ahwazi,5/61)

In fact, some scholars are of the opinion that korban is wajib. This act of worship is also an eminence needed to be highlighted in the Muslim community different from giving sadaqah which is Sunnah. This is mentioned by Imam al-Nawawi in al-Majmu’:

In addition, korban itself is one of sadaqah which has to be given to the poor and needy. It is invalid to do korban if a portion is not given to the poor which enough to feed their hunger. (Refer: Mughni al-Muhtaj, 4/291). This matter is stated in the Fiqh rulings on the normal setting.

However, during this Covid-19 pandemic happening right now, we are of the opinion that giving sadaqah with the same amount of paying for korban is more prioritized from doing korban itself for those who intend to do it, but have no other spare money to do sadaqah.

During this outbreak, our society suffer from not having enough basic necessities like cash money, staple food and the like. Besides, this approach is also closer towards protecting the maqasid syari’ah which is the protection of life (hifz al-nafs). This is because basic needs if are not available may affect one’s health and even life. Therefore, in such situation, protecting the life and health is more prioritized. To add, in current situation the needy are more in need of basic necessities, staple food and cash money in compared to the meat to eat.

This is based on the legal maxim mentioned by Imam al-Suyuti in his book al-Asybah wa al-Nazair:

“Good deeds with broader benefits towards the public are prioritized than deeds with limited benefits” (Refer: al-Asybah wa al-Nazai’r, 1/144)

Based on this maxim, we can see that giving sadaqah with the same amount of paying for korban is more prioritized than doing the korban itself because the sadaqah may give more benefit than the korban meat at this moment.

In normal setting, korban is the most prioritized of all deeds on the day of Eid al-Adha and the 3 tashriq days based on the hadith of the Prophet PBUH. However, during this Covid-19 pandemic situation, if there are people who need cash money more than the korban meat, so it is prioritized for those who are only capable of doing korban to give sadaqah with the same amount of paying the korban than doing the korban itself. In the current situation where people have no money and food, basic necessities and money are much needed than the korban meat.

However, for those who are wealthy, it is advised to not leave the korban because the original rule of it is still prioritized for him and so the eminence of korban will not fade as well as keep giving sadaqah to the poor and needy so they will not be short of staple food.