IRSYAD FATWA HAJJ AND KORBAN EDITION SERIES 53: IS IT PERMISSIBLE TO SELL THE KORBAN ANIMALS’ SKIN DONATED FOR THE POOR AND NEEDY? 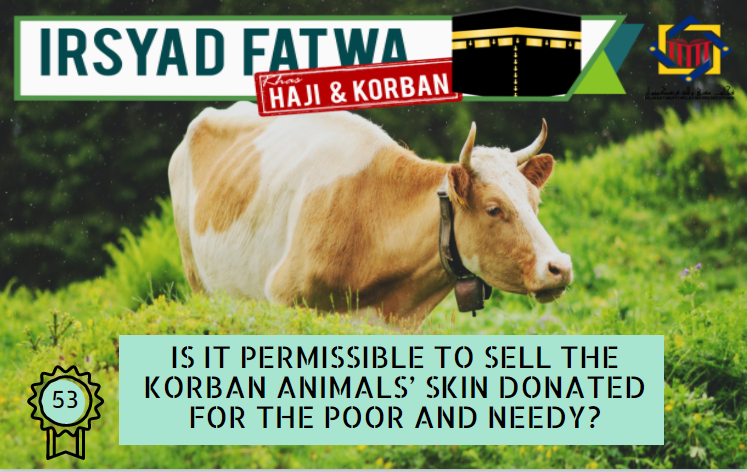 Assalamualaikum. I represent a charitable organization that helps the poor and needy. My question is, is it permissible for us to sell the korban animals’ skin which is donated to us then the money is given to the poor and needy as a donation. Thank you.

According to the opinion of madhhab al-Shafi’e, it is impermissible to sell and take any part of the korban as wages whether it is from an obligatory or Sunnah korban. However, it is permissible for the needy to sell the korban parts they got like the skin to take benefit from it. Besides, an organization may help and manage it to ease the needy.

Korban is one of the eminences of Islam in comprehending the great sacrifice done by Prophet Abraham AS and his son Prophet Ismail AS. Allah SWT promises great rewards and virtues for those who do it solely for Allah SWT.

So pray to your Lord and sacrifice [to Him alone].

Coming back to the presented question, it should be analyzed on the prohibition of selling parts of the korban. According to the opinion of madhhab al-Shafi’e, the scholars had decided that it is prohibited for a person who does the korban to sell any part of his korban. The same goes for giving wages of the korban to the slaughterer from the korban parts itself. This is as mentioned by Imam al-Nawawi in his book:

“Statements (fatwa) of al-Shafi’e and the scholars of his madhhab have decided that verily it is impermissible to sell any part of al-hadyu (animals slaughtered as dam payment) and nazar korban animal (obligatory korban) or Sunnah korban whether the meat, fats, horns, wools and etc. and it is impermissible to make its skin and other parts as the wage for the slaughterer. However, it is permissible for the one who does the korban and those who are paying their dam to give sadaqah or take benefit from the parts like making as a water bag, a pail, a khuf and etc.”

Besides, for the recipients of the korban distribution, if they are from among the wealthy, they are prohibited from selling the parts received and use them for the benefit of people other than the poor and needy. This is because the position of the wealthy people is the same as those who did the korban.

“For the needy people, spending the korban parts received even by selling the received items after having it is different from the wealthy who are prohibited to do so like selling them but to use the korban parts like by eating it, giving it as sadaqah or feeding their guests even though they are among the wealthy. This is because their position is the same as those who did the korban”.

Hence, in answering the presented question as well as upon analyzing the dalil and nas, it can be concluded that it is prohibited to sell and take benefit from any parts of the korban as a wage whether it is an obligatory or Sunnah korban. However, it is permissible to sell the korban parts received like the skin to take benefit from it. Besides that, an organization may help by managing it to ease the poor and needy.