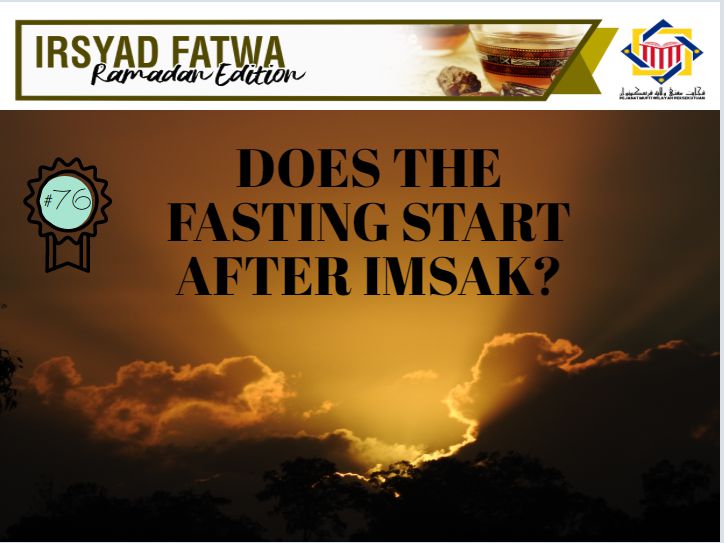 Assalamu‘alaikum SS Datuk Mufti. Generally, it is known that imsak is ten minutes before Subh. Does this means that we are not allowed to eat or drink after imsak because the fasting has already started?

Among the sunnah of fasting is to eat suhoor in the final time of it. As we all know, in Malaysia, the time for imsak is ten minutes before Subh. However, sometimes this caused confusion as to when does the fasting really begin. To discuss this issue, let’s study the following statement of Allah SWT:

“And eat and drink until the white thread of dawn becomes distinct to you from the black thread [of night]. Then complete the fast until the sunset.”

Al-Imam Ibn Kathir Rahimahullah stated in his commentaries that the above verse clearly specifies the time to stop eating suhoor, which is when the sun rises. [1]

There are several hadiths that describe the time of when the Prophet PBUH eat his suhoor:

Al-Hafiz Ibn Hajar al-‘Asqalani further explains that the recitation of fifty verses are in moderate pace of recitation. And the verses’ length is of moderate length, not of a lengthy or short verse. [2]

“We have explained previously that when the sun rises and there is still food in one’s mouth, then he has to remove the food and complete his fast. If he swallows anything in his mouth after the sun rises, then his fast is invalid. The evidence that supports this is a hadith from Ibn ‘Umar and ‘Aisyah R.Anhum, where the Prophet PBUH said: إِنَّ بِلاَلاً يُنَادِي بِلَيْلٍ، فَكُلُوا وَاشْرَبُوا حَتَّى يُنَادِيَ ابْنُ أُمِّ مَكْتُومٍ  (the stated hadith)…”[3]

We view the time of imsak as basically a time of ihtiyat (caution) where someone needs to be careful to not eat or drink exceeding the set time, for it could invalidate someone’s fast. We agree with setting the time of imsak so that people could be careful in these times and if someone accidently wakes up late, it is permissible for him to eat his suhoor during this time. However, we suggest he should finish eating his suhoor before the adhan to avoid any doubts (syubhah).

Lastly, we would also like to include the wisdom of delaying the suhoor; it is so that Muslims could prepare themselves for Subh prayer, where if someone eat his suhoor early, he would possibly fall asleep again and the possibility of him leaving his Subh prayer is high. It is preposterous for a Muslim to chase the sunnah but leave what is an obligation.