THE RULING OF THOSE WHO FAST BUT DO NOT PRAY 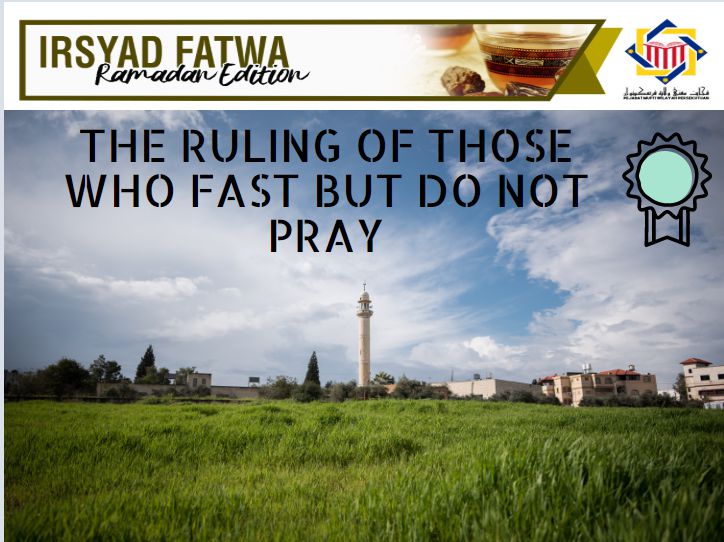 Assalamu‘alaikum SS Datuk Mufti. What is the ruling of someone who fasts but does not pray?

To answer this question, we will start with the words of Syeikh Dr Yusuf al-Qaradhawi through his book Fatawa Muasirah: "Muslims are commanded to perform the obligatory worships which are, prayer, zakat, fasting in the month of Ramadhan and performing hajj for those who are able. Whoever leaves any of these worships without any reason (permitted by syarak), then he is among the transgressors."

In a hadith narrated by Muslim, this issue is explained by: "The difference between believers and disbelievers is prayer."

Some scholars considered those who leave the worship of prayer purposely as disbelievers. Thus, the fast of these people is unaccepted and invalid for the acts of worship or good deeds of disbelievers are invalid.

Other scholars state that, although he does not pray, he is still a Muslim for his belief towards Allah and His Messenger as well as not rejecting or be contradict with what has been revealed by Allah SWT or what was said by the Prophet PBUH. However, he is considered as a fasik.

Hopefully, this is the accurate opinion. If he neglects his obligatory worship because of laziness or evil desires, without denying or disrespecting what has been sanctioned as worship, then he is still a Muslim but his faith is weak.

There will be rewards for his good deeds but there will also be great punishments for his transgressions. Allah SWT states:

"And every small and great [thing] is inscribed."

In another verse of the Quran:

In this issue, we will like to conclude the opinions of scholars regarding someone who fast but did not pray, like the following:

The first opinion: He has considered as a disbeliever and his fast is invalid. They must repent to Allah SWT before performing prayer. This is the opinion in mazhab Hanbali and some contemporary scholars.

The second opinion: He who does not pray but still fast, his fast is valid but it will not be rewarded. This is the opinion of most al-Azhar scholars such as ‘Atiyyah Saqar, Dr. Ahmad Syarbashi, Dr. Muhemmed al-Bakri Ismail and others. This is in line with the words of the Prophet PBUH: "Whoever does not give up forged speech and evil actions and does not abandon foolishness, Allah is not in need of his leaving food and drink (i.e. Allah will not accept his FASTING)."

We are inclined towards the opinion that state that the fast of someone who does not pray is valid but it will not be rewarded, for he neglects one of the pillars of Islam, which is prayer.

This is one of the Ahkam al-Siyam (Rulings of Fasting) which should be understood by Muslims so that they can complete their fasting correctly.