THE RULING OF EATING FOOD PREPARED BY A SINNER 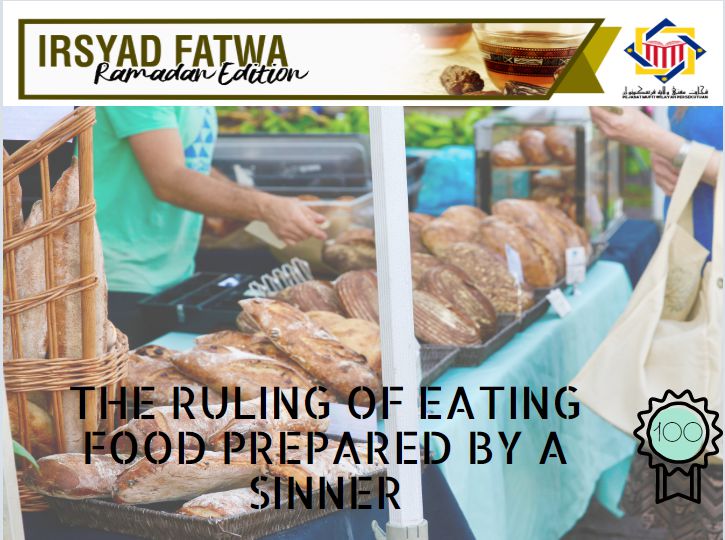 Assalamu‘alaikum SS Dato’ Mufti. Is it true that we are not supposed to buy food from food stalls or vendors in bazar Ramadhan, which is prepared or sold by a person who does not cover the aurah?

First: The Commandment of Eating Halal and Good Food

There are numerous pieces of evidence from the Quran and al-Sunnah regarding the commandments for a Muslim to eat halal (permissible) and good food. This is stated by Allah SWT, through the verse:

“O mankind, eat from whatever is on earth [that is] lawful and good.”

Imam al-Thabari Rahimahullah commented on the above hadith stating: “O mankind, eat from everything that I have made permissible for you through the words of My messenger Muhammad and (food) that I considered good for you.”

He further defines the meaning of thayyib (good) stating: “Which (food) is clean and pure from any impurities and the prohibited.” See Tafsir al-Thabari, Ibn Jarir al-Thabari (3/300).

Hence, it is understood that it is an obligation for every Muslim individual to eat halal and good food in our lives on earth.

Second: The Ruling of Eating Food Sold by a Sinner

There is no specific evidence regarding this issue. Except for a basic guideline in the issue of nutrition, where a Muslim should eat halal and good food without considering who cook, prepare or sell the food.

This is a common issue every time Ramadhan starts, for there are statements and sayings in the society saying that we should not buy food from sellers who do not cover their aurah or pray, and commit other types of sins.

However, there are several opinions of the jurists (fuqaha’) that explains the issue of eating food cooked by a non-Muslim. Here, we state that it is not an offense to eat food cooked and prepared by a non-Muslim from milk, vegetables, fruits and other types of food with the exception of their slaughter.

“It is permissible to eat the food of the Zoroastrians (Majusi; fire worshippers) except for their slaughter.”

The same is stated in the commentaries of al-Imam al-Qurtubi:

“Abu Umar said: And it is permissible to eat the food of the idolaters, Zoroastrians (Majusi; fire worshippers) and the people not from the people of the book from the disbelievers, as long as it is not from their slaughter.” See Al-Jami’ Li Ahkam al-Quran, Al-Qurthubi (6/77).

To close, we would like to state that buying and eating food from sellers who do not cover their aurah is permissible according to the syarak as long as the prepared food is halal (permissible) and thayyib (good) in the aspects of preparation, hygiene and the place where the food is sold.

However, if someone on the basis of being cautious (warak) refuse to buy food from sellers who do not cover their aurah, then it is permissible for him. But, he should not prevent others to do as he does, to avoid confusion and misunderstanding in our community. This is in accordance with a narration:

“And do not eat from anything but the food from the God-fearing people.”

Syeikh ‘Ali al-Qari Rahimahullah state the reason for it as: “The reason is, the food from the people of taqwa is presumed to be permissible (halal) and will have an effect in our deeds (worship).” See Mirqaat al-Mafatih, Ali al-Qari (8/3141).

We would also like to take this opportunity to advise all the sellers in bazar Ramadhan to take this chance of being in this blessed month of Ramadhan to seek blessings in business. Thus, let all of us improve ourselves and cover our aurah, maintain our prayer, be honest in measure and trade, and to avoid sins in all our business transactions.

Lastly, may Allah SWT give us the correct understanding of our religion. Ameen.