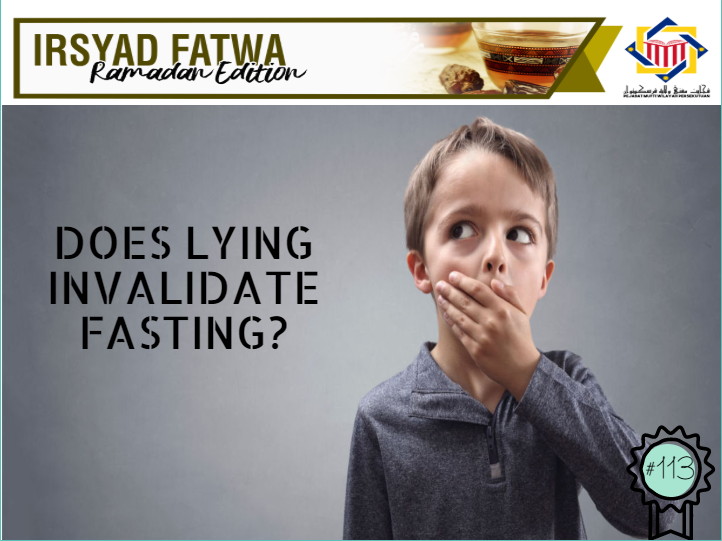 Imam Ibn Hajar al-Asqalani defines lying as the following: “Disclosing something which is different from what it really is, whether it is done on purpose or not.” Refer Fath Al-Bari, Ibn Hajar (1/201).

While, Imam al-Nawawi explains the meaning of lying as: “Declaring something which does not describe the real situation of something, whether it is done on purpose or not, and whether it is of something in the past or in the future.” See Syarah Sahih Muslim, Al Nawawi (1/69).

Lying is included as one of the greatest sins as stated by Allah SWT in the Quran:

“So, avoid the uncleanliness of idols and avoid false statement,”

The above verse clearly shows that the act of lying is paired together with the act of worshipping idols. Thus, both acts are considered as great sins.

Imam al-Nawawi explains regarding the ruling on lying stating: “Indeed, it is clear from the evidences of the Quran and al-Sunnah regarding the prohibition of lying. It is considered as a sin and a despicable act. The scholars have agreed regarding its prohibition due to the clear evidences supporting it.” Refer Al-Azkar Al-Nawawiyyah, Al Nawawi (pg. 377).

Lying while fasting results in a greater sin for the person. The reason is, sin and rewards for an act of someone depends on the time and place it was committed. Hence, sinning especially in the blessed month of Ramadhan while someone is fasting makes the sin greater in the eyes of Allah SWT.

In a hadith narrated by Abu Hurairah RA, the Prophet PBUH said:

“Whoever does not give up forged speech and evil actions and does not abandon foolishness, Allah is not in need of his leaving food and drink.”

Imam Ibn Hajar cited the words of Imam Ibn Battal when he commented on the above hadith: “The hadith does not mean to ask people to leave fasting. However, it is meant as a threat against the act of lying.” Refer Fath al-Bari, Ibn Hajar (4/139).

Referring to the above hadith, scholars give various commentaries regarding what is meant by the statement made by Prophet PBUH. Some commented that the fast of a person is not accepted by Allah SWT. While others state that the rewards for the fast is reduced.

The following we include the statement of Imam Ibn al-Munir: “As a matter of fact, the statement of the Prophet PBUH figuratively means (kinayah) that the fast is not accepted (the fast of those who lied while fasting).”

The above statement is supported by Imam Ibn al-‘Arabi, who said: “The hadith means that whoever committed the act stated (lie/involve forged speech), then he will not gain any reward  from his fast.”. This means that he will not receive any rewards for his fasting and at the same time accumulate sin for lying.

Whereas Imam al-Baidhawi states: “The purpose of fasting is not just the act of abstaining oneself from eating and drinking only. However, it includes controlling one’s desires and subjugate nafs al-ammarah which will lead to nafs al-muthma’innah. If such is not achieved (through fasting), Allah SWt will not look at him (accept his deed).”

Thus, the Prophet PBUH’s words: “Allah is not in need of his leaving food and drink.” Figuratively means that Allah SWT will not accept his fast.

Imam al-Subki states that there are two wisdoms from the hadith; one is that it is a greater sin and despicable act for someone to sin while he is fasting compared to when he is not, and two, someone should strive to save and maintain his fast and avoid the act of lying.

In turn, he managed to perfect his fast at the same time avoid the sin of lying. If not, his rewards for fasting is decreased. Refer Fath al-Bari, Ibn Hajar Al-Asqalani (4/139).

As a conclusion, after analyzing the scholars’ opinions in the above discussion, then, lying does not invalidate the fast of someone. However, lying will undoubtedly decrease the rewards of the fast.

Furthermore, lying should be avoided especially in the blessed month of Ramadhan. Let us make Ramadhan as a starting point for us to better ourselves and to avoid sins and transgressions.

Regarding the matters that invalidate fasting, we have briefly discussed about it in Al-Kafi #395 : Matters that Invalidate the Fast and can be accessed through the link: https://bit.ly/2EfsmAr

Lastly, may Allah SWT bless us with correct and clear understanding in our religion. Ameen