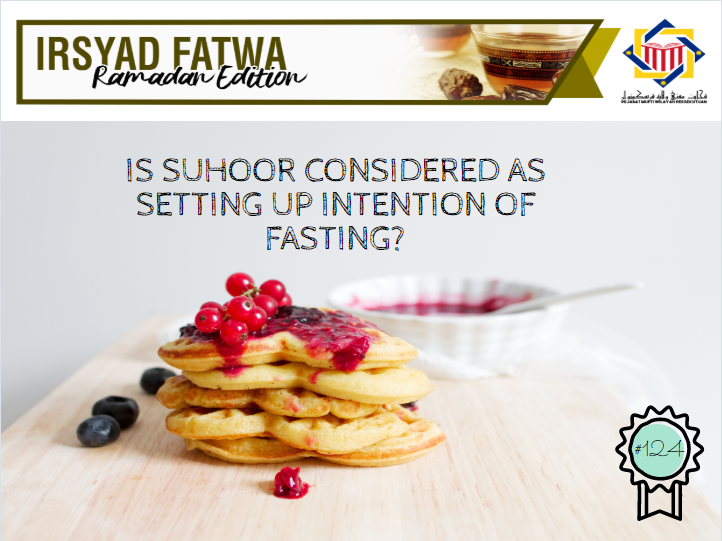 Assalamualaikum w.b.t. I request for some enlightenment from SS Dato’ Seri in regards of my question. If one did not set his intention during the night, but had his suhoor as the preparation of fasting, is his fast valid according to our mazhab?

Fasting is one of the acts of worship obligated by Allah SWT towards His servants. Therefore, every worship or actions specifically done for the sake of Allah in need of a clear distinction in terms of the intention between the act of worship and regular actions, like distinction of those who refrain themselves from eating and drinking due to fasting and those who do the same merely due to absence of food.

The basis of the obligation of setting intention in every act of worship is the hadith narrated by Umar al-Khattab RA:

“(The value of) an action depends on the intention behind it. A man will be rewarded only for what he intended”

Hence, the intention of fasting is set as a condition of validity of one’s fast. This matter is clearly stated in the books of Islamic jurisprudence, one of them is what is said by Ibn Qasim:

“(The conditions of validity of fasting are four things): one of them, (intention) in one’s heart, if one intends on having obligatory fasting like the fasting of Ramadhan or of vow (nazar), then he is obligated to set up his intention during the night” Refer Fath al-Qarib (1/136).

According to majority of the jurists (fuqaha’), the intention of Ramadhan fasting should be set every day during the night as mentioned, before reaching the time of Subh prayer. This is because, each day in Ramadhan is counted separately. Refer al-Mausuah al-Fiqhiyyah (28/26).

In setting up intention, one should set it according to what had been mentioned by us before through the article: IRSYAD FATWA RAMADHAN EDITION #74: SETTING INTENTION FOR FASTING IN RAMADHAN; EVERY NIGHT OR FOR THIRTY DAYS AT ONCE? In this article, it is stated as follows:

There are several conditions that must be fulfilled for setting the intention for fasting. Most fiqh books set guidelines in setting intention for easy understanding. Among the conditions stated are as the following:

“There is no fast for the one who does not intend to fast before dawn.”

Referring to the question asked, is the action of getting up to have suhoor considered as setting up intention without him even having the intention in his heart, then this matter is answered by Imam Ibn Hajar al-Haithami:

“If one has his suhoor in the intention of fasting or refraining (himself) from things or actions that invalidate his fasting in the fear of the setting of the sun while it comes to his mind to fast, then it is enough (to be considered as fasting), because the thought of fasting with actions lead to it (fasting) or by leaving actions that deny (his fasting) (indirectly) is included in the intention of fasting. Refer Tuhfah al-Muhtaj fi Syarh al-Minhaj (3/386).

The statement above is referred to, and it is stated that those who wake up to have their suhoor which surely is the intention of fasting and not because of having breakfast or any other intention, then it is enough according to one of the opinions of the jurists of mazhab al-Syafie’ as what has been mentioned above.

According to the evidences and the judgements above, we would like to say that fasting of those who get up to have suhoor while refraining themselves from actions that may invalidate their fasting before sunrise is valid even if they forget to set up their intention specifically.

However, one who intend to do his obligatory fasting especially in this month of Ramadhan is advised to set up his intention in his heart during the night. If he fails to do so, but had suhoor and refrained himself from actions that may invalidate his fasting starting from sunrise, then his fasting is valid.

May we get taufiq and hidayah in applying Shari’ah in our lives. Amen.