IRSYAD FATWA SERIES RAMADHAN EDITION 127: WHAT IS MEANT BY THERE IS A BLESSING IN SAHUR? 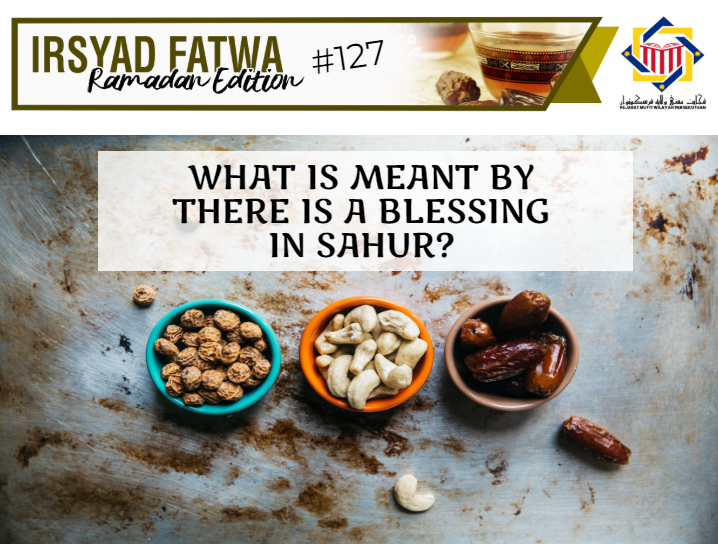 Assalamu‘alaikum. What is the meaning of there is a blessing in sahur from the hadith (تَسَحَّرُوا فَإِنَّ فِي السُّحُورِ بَرَكَةً)?

Sahur is an act of eating and drinking in the early morning before sunrise with the intention of fasting for that day.

The mentioned hadith is narrated by Anas bin Malik RA, where he said the Prophet PBUH said:

“Take Suhur as there is a blessing in it.”

In the above-stated hadith, there are two opinions as for the word sahur; whether it is read as sahur (السَّحور) with fathah and suhur (السُّحور) with dhammah (fathah and dhammah are diacritical marks in Arabic).

Imam Ibn Hajar al-‘Asqalani in Fath al-Bari said: “The word sahur with the fathah (السَّحور) and dhammah (السُّحور), which means blessing as rewards and remuneration, then the accurate diacritical mark is dhammah for it is a masdar (derivative word), with the meaning that the act of taking sahur or a blessing.” (See Fath al-Bari, 4/140)

Imam al-Azhari said: “Sahur (السَّحور) is whatever is eaten or drank for sahur from any type of food or milk from all types of food eaten during that time. As an example, a man takes his sahur, which means he had eaten before sun rise.” (See Tahdzib al-Lughah, by Muhammad bin Ahmad bin al-Azhari al-Harawi, 4/171-172).

While Imam Ibn al-Athir said: “Sahur (السَّحور) with fathah means anything that is eaten or drank for sahur, meanwhile suhur (السُّحور) with dhammah is a derivative and fi’il (the act) itself, and in most narrations it is said that it is with fathah, whereas dhammah is the accurate diacritical mark for the word, for when the letter sin with fathah means food. As for the meaning of blessing and reward is the act of eating itself, not food.” (See al-Nihayah fi Gharib al-Hadith wa al-Athar, by Ibn al-Athir, 2/347).

The Time for Sahur

Sahur starts at the end of the night before the sun rises. It is a sunnah to delay our sahur until it is near to Subuh time, as stated in the hadith from Zaid bin Thabit RA, he said:

“We took meal shortly before dawn along with the Messenger of Allah (ﷺ). We then stood up for prayer. I said: How much span of time was there between the two (acts, i. e. taking of Sahri and observing of prayer)? He said (a span of reciting) fifty verses.”

50 verses stated in the above hadith means the duration of time for the recitation of the Quran, which is similar to the time of imsak, which is the time of caution towards the Subuh time.

Imam al-Nawawi commented on the above hadith saying: “It means, the duration is as long as the time for the recitation of 50 verses of the Quran and the encouragement to delay the sahur near to the time of sun rise.” (See Syarh al-Nawawi 'ala Sahih Muslim, 7/208-209).

The Encouragement of Sahur

“The difference between our fasting and that of the people of the Book is eating shortly before dawn.”

Imam al-Nawawi commented on the above hadith: “It means, the greatest difference of our fasting and their fasting (the people of the book) is sahur, indeed they do not take sahur and it is sunnah for us to take our sahur.” (See Syarh al-Nawawi 'ala Sahih Muslim, 7/207).

A Muslim should not neglect taking his sahur even if his sahur is just a glass of water, a date or others, but the best of sahur is of dates and water as narrated by Abu Hurairah RA, the Prophet PBUH said:

“How good is the believers’ meal of dates shortly before dawn.”

Syeikh Abd al-Muhsin al-‘Abbad commented the above hadith saying: “The hadith commended a believer who eat date for his sahur, for there is a special nutrient in the date itself. There is a sound hadith explaining: A house of which there are no dates in it, then its inhabitants will go hungry, for dates is a staple food for them. Thus, sahur with dates is a commandment, for it is known the word ni’ma (نِعْمَ) is a word of praise.” (See Syarh Sunan Abi Dawud, by Syeikh Abd al-Muhsin al-'Abbad, 8/255).

The Blessing in Sahur

Ibn Hajar al-‘Asqalani when commenting the hadith states: “The blessing in sahur is from several aspects; it is us following a sunnah, contradicts the actions of the people of the book, replenishing our energy for us to perform the worship of fasting, abstain ourselves from misdeeds due to our hunger, a reason for us to give charity to the poor and needy, a reason for us to offer supplication and dhikr, a time where supplications are accepted and a time to set the intention for those who forgot to set their intention before they sleep.” (See Lihat Fath al-Bari, 4/140)

Whereas, in the commentaries of Imam al-Nawawi, it is stated: “The above hadith encourages the act of sahur. Scholars agreed that it is sunnah and encouraged not an obligation, and there is a blessing in taking the sahur, for it strengthens our body and motivates us to fast, which will result in an encouragement to increase our worship of fasting for it is easier for those who take their sahur. This is the correct and final opinion regarding to its meaning. And it is stated: Furthermore, if it is followed with the act of waking up, remembering Allah through dhikr, supplication during the honoured and blessed time where supplications are accepted and istighfar.” (See Syarh al-Nawawi 'ala Sahih Muslim, 7/206).

The blessing in sahur stated in the hadith is divided into two:

Based on the above evidences, we would like to state that sahur is sunnah and encouraged in Islam where there is a blessing promised by Allah SWT through His Messenger the Prophet PBUH.

Neglecting sahur without valid reasons is unreasonable such as because you are lazy to wake up early, it should be avoided and a great loss for the person fasting himself, because it may weaken his body, demotivate himself and others. We advise all of us to wake up and take our sahur even if it is just a date or a glass of water.

May Allah SWT bless us with guidance in practising His religion. Amin.