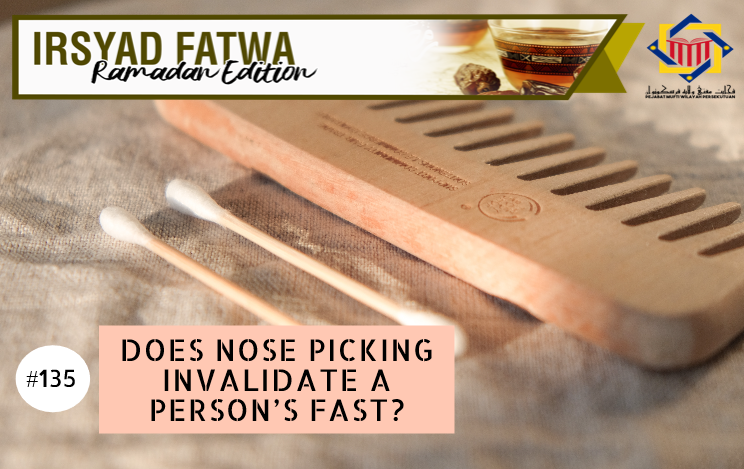 If a person picks his nose, does it invalidate his fast?

The nose is considered as an open body cavity which is connected to the jauf or the central body cavity. In madhhab al-Syafi’e, intentionally inserting anything (physical matter) into the open cavity without any necessity invalidates fast. In the book al-Fiqh al-Manhaji (1/342) stated that one of the matters that invalidates fast is “something reaches (the open cavity). It must be something that is visible through the naked eyes. Jauf is a part of the brain [1] or the part after the throat all through the stomach and intestines. Whereas body open cavities are the mouth, ears, the genitals and anus for both man and woman.”

The nose is considered an open cavity the same as the mouth, which is divided into two parts, the apparent (outer) and hidden (inner) parts. The discussion on this issue can be found in istinsyaq (rinsing the inner part of the nose by breathing water in – similar to the practise of nasal irrigation, sinus flush or nasal lavage) and madhmadhah (gargling) during fast. This is based on a hadith of Laqit bin Sobrah RA where the Messenger PBUH said to him:

“Perform a perfect Wudu run (your fingers) through the fingers of the hands and the toes, and if not fasting, sniff water up well inside the nose.”

Sunan al-Tirmizi (788) and others. Al-Tirmizi said the hadith is sahih.

The ruling of gargling and istinsyaq while performing ablution is sunnah regardless of whether the person is fasting or not. The only difference is, for a person who is fasting, he is restricted, which means it is makruh (undesirable) for it to be done mubalaghah (excessively) when he is gargling or performing istinshaq.

“Don’t be mubalaghah (excessive) (when performing istinshaq), that it become su’ut (the methodology of inserting something, commonly used to channel medication to the inner part of the nose). If not, indeed, the invalidation of fast is related to something reaching to another part, thus, syarak prohibits this. This is also due to the fact that anything that reaches the brain of a human can be benefitted in terms of its nutrients, the same way as something which reaches the open cavity, thus, the fast is invalidated because of this, the same way as when something is inserted or reaches the open cavity.”

Hence, the act of isti’at which means inserting something such as drop medicines which reaches the brain through the nose invalidates fast. Refer Ghayah al-Bayan Syarh Matan Ibn Ruslan (pg. 302) by Imam Syamsuddin al-Ramli.

While when discussing on matters which are makruh while fasting, Syeikh Muhammad al-Zuhaili said:

“…leaving mubalaghah when gargling and istinshaq for those who are fasting is a precautionary step so that the water will not precedes it until it reaches the throat and he swallows it, which invalidates his fast.”

Imam al-Nawawi also cited the words of the ashab (Syafi’iyyah):

“Our ashab said: Excessive (mubalaghah) when gargling is when water reaches the base of the throat where the water is swirled there, and during istinshaq it is when the water reaches the khaisyum regions. It is stated in al-Tatimmah book: then he inserted his fingers and remove any dirty residue from his nose.”

“And for the nose it is until the end of al-khaysyum (the base of the nose); this is the outer part of it of which the fast is invalidated if a person intentionally induces vomiting here and swallowing nukhamah (phlegm) from this region, and it does not invalidate it if something is inserted to this part if it stops it. If (this part) is obligated to be washed. And for the inner part, it does not invalidate it for swallowing mucus with it and there is an abrogation on it (the obligation) to wash it when performing the obligatory bath.”

From the above statement, it is clear to us that the act of picking one’s nose does not invalidate his fast. The reason is it is permissible for a fasting person to perform the Sunnah of istinshaq. Except that if it is done excessively that water reaches the base of the nose or kaisyum then it is makruh (undesirable) as long as it does not reach the brain or throat. If it reaches these regions, then the fast is invalidated. Thus, according to this fact, it is clear that the act of nose picking does not invalidate fast because the method is the same, which is inserting something into the nose to clean it. The reason is although there is an act of inserting something into an open cavity it does not exceed the limit of the cavity that invalidates fast. However, if it is done using some apparatus that reaches to the brain, then his fast is invalidated. Wallahua’lam.

[1] the term brain here refers to the region near the brain. Modern scientific research shows that the pathway of the nose does not directly linked to the brain. Wallahua’lam.