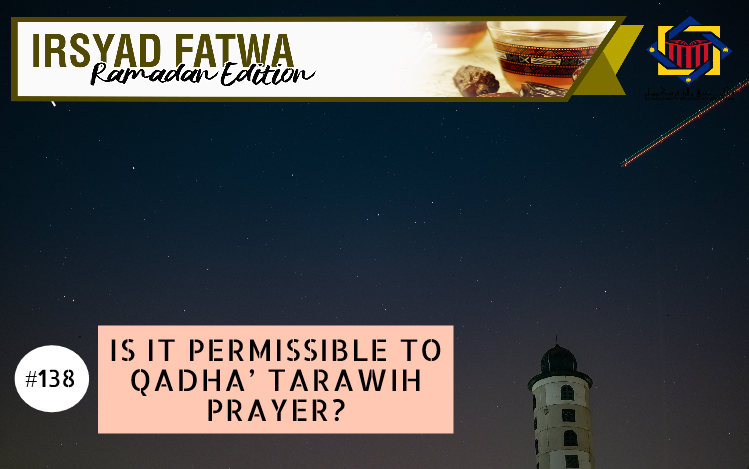 Assalamualaikum ustaz. Due to my work, I’m forced to work until very late at night. Is it permissible for me to qadha’ my tarawih prayers?

Sunnah tarawih prayer is a special worship in Ramadhan granted by Allah SWT. This is what is meant in a hadith of the Prophet PBUH:

“Whoever stood for the prayers in the night of Ramadhan out of sincere Faith and hoping for a reward from Allah, then all his previous sins will be forgiven.”

Tarawih prayer is sunnah as stated in the above hadith. It is sunnah for there is a qarinah (indication) which indicates that its ruling is sunnah and not wajib. This is explained in a hadith narrated by ‘Urwah RA, where Aisyah R.Anha informed him:

"Allah's Messenger (ﷺ) went out in the middle of the night and prayed in the mosque and some men prayed behind him. In the morning, the people spoke about it and then a large number of them gathered and prayed behind him (on the second night). In the next morning the people again talked about it and on the third night the mosque was full with a large number of people. Allah's Messenger (ﷺ) came out and the people prayed behind him. On the fourth night the Mosque was overwhelmed with people and could not accommodate them, but the Prophet (ﷺ) came out (only) for the morning prayer. When the morning prayer was finished he recited Tashah-hud and (addressing the people) said, "Amma ba'du, your presence was not hidden from me but I was afraid lest the night prayer (Qiyam) should be enjoined on you and you might not be able to carry it on."

“If a sunnah worship is missed, it is sunnah to qadha’ it according to the most manifest opinion.” See Mughni al-Muhtaj (1/224).

According to the above discussion, we would like to state that it is permissible to qadha’ sunnah tarawih prayer if a person missed it before its time ends. The reason is the rewards for those who perform it are immense and it is a special worship in Ramadhan which is the month of worship. It is such a waste to miss any worship and just let it be.

May Allah SWT grant us the strength to enliven Ramadhan with worship to Allah SWT. Amin.