IRSYAD AL-FATWA SERIES RAMADHAN EDITION 152: WHY IS IT THAT THE REWARDS OF OUR WORSHIPS ARE MULTIPLIED IN RAMADHAN? 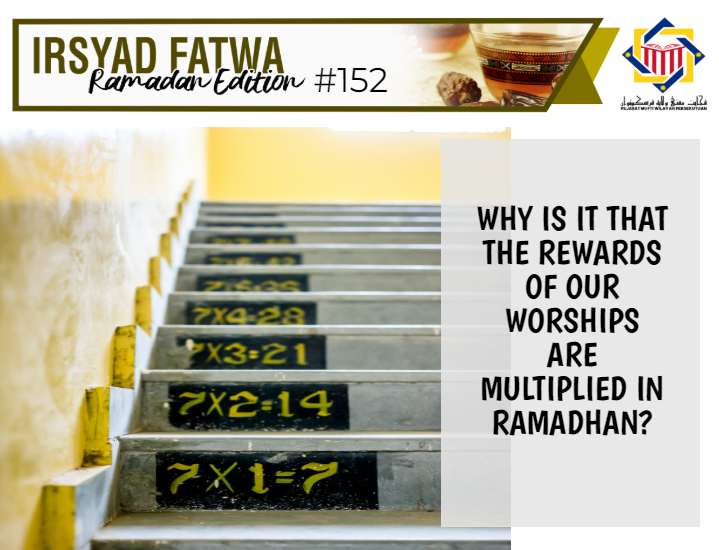 Assalamualaikum ustaz. I want to ask a question. Why is it that the rewards of our worships are multiplied during the month of Ramadhan, unlike any other months?

Indeed, Allah SWT rewards His slaves who worship Him according to His will, not subject to any rules. Allah SWT states:

“And to Allah belong the unseen [aspects] of the heavens and the earth and to Him will be returned the matter, all of it, so worship Him and rely upon Him. And your Lord is not unaware of that which you do.”

Imam al-Tabari commented on the above verse saying that only for Allah SWT is every worship and deed. He will reward everyone according to their deeds in accordance with His will. (Refer Tafsir al-Tabari, 1:235)

Allah SWT multiply the rewards of certain deeds due to the advantages or honour that He has granted them. These honours are as the following:

"One prayer in my Mosque is better than one thousand prayers in any other mosque excepting Al-Masjid-AI-Haram."

“So, when the month of Ramadan come, perform Umra, for'Umra in this (month) is equal to Hajj (in reward).” In a narration by Imam Muslim: “the same as performing hajj with me (the prophet PBUH).”

According to the above discussion, we would like to conclude that the great advantages and rewards offered by Allah SWT in the month of Ramadhan is due to the honour Allah SWT has grant it. Allah SWT has chosen the month of Ramadhan, for several significant events in Islam such as the time when the Quran was revealed (nuzul al-Quran), the opening of the city of Mecca (Fathul Mecca), the opening of the city of Andalusia and others. Furthermore, Allah SWT also specifies one night of which it is greater than a thousand nights which is the night of al-Qadr (Lailatul Qadr). Allah SWT states in the Quran:

“The Night of Decree is better than a thousand months.”

Hence, Allah SWT multiplies the rewards of every worship performed in the month of Ramadhan compared to in any other months. May Allah SWT give us all the sahih understanding in the religion and bless us with taufiq and hidayah to perform worship to Him with sincerity, especially in this blessed month of Ramadhan. Amin.