IRSYAD FATWA RAMADHAN EDITION SERIES 157: THE RULING OF SELLING FOOD DURING THE DAY IN RAMADHAN 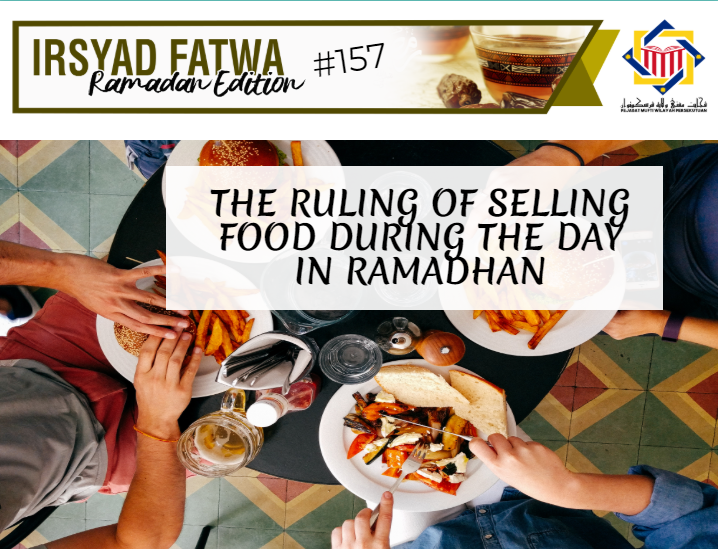 What is the ruling of selling food during the day in Ramadhan?

The issue of selling food at daytime in Ramadhan is a contemporary issue which exists due to the shameless acts of Muslim nowadays who do not fast in Ramadhan without having any permissible excuse and sometimes even flaunting the fact publicly. While most other Muslims are fulfilling the fourth pillar of Islam with firm faith and hope for rewards from Allah, there are some sellers who disregard their sensitivity on this matter and let those who are not fasting to drink and eat in their premise. This is a Shari’a offence in most of the states in Malaysia which prohibits the selling of food and drinks for immediate consumption to Muslims during the day in Ramadhan.

In Section 15 of Syariah Criminal Offences (Federal Territories) Act 1997, it is stated that:

(a) sells to any Muslim any food, drink, cigarette or other forms of tobacco for immediate consumption during such hours; or

(b) openly or in a public place is found to be eating, drinking or smoking,

Hence, even if in the Islamic rulings pertaining selling and buying originally do not have a say on the prohibition of selling and buying foods during the fasting period in Ramadhan, but Islamic authorities have the right to impose suspension and control upon such activity when there are purposes acknowledged by the Shari’a. Kindly refer our article entitled Irsyad Usul al-Fiqh Series 50: The Rights of the Authorities to Limit Permissible Matters (Taqyid al-Mubah) [1]. Briefly, we state:

“Consequently, we state that the method of taqyid al-mubah is a sahih and recognized method according to syara’, and it also aligns with the examples in Fiqh rulings as well as other syara’ methods. However, stating the conditions or restrictions towards the permissible is not something absolute, and it is only limited to the permissible scope by the authorities to interfere, and it must be in the purpose of protecting the public welfare (general maslahah) and preventing harm.”

For example, in the case of price determination and control; in a hadith of the Prophet PBUH where the people asked him to control the market price which skyrocketed at the time, but the Prophet PBUH refused and said:

Allah is the one Who fixes prices, Who withholds, gives lavishly and provides, and I hope that when I meet Allah, none of you will have any claim on me for an injustice regarding blood or property

This hadith indicates that the sellers have the right to set the price and the government have no right to interfere. However, according to Sheikhul Islam Ibn Taimiyyah, this hadith cannot be used as an argument to prohibit the price control by the authorities because it is a specific case and is not applicable in every situation. In fact, in some situations, price control is a form of justice and fairness while it can be a transgression in other situations.

“Today, it is permissible for a mujtahid to permit price control considering the change of circumstances and societal situations. The purpose of price control is to protect public welfare (maslahah ammah). There are opinions which permit price control during the time of al-ghala’ (economic crisis) upon foods. Hence, when the authorities have stated the shilling price and then the sellers disobey the rule, the authorities have the right to impose ta’zir (punishment) upon the buyers, even if the selling and buying is originally sahih.”

Besides, an Islamic legal maxim states:

“Helping towards sin is a sin”

“Something that leads to a haram is also haram,”

Based on the above facts and explanation, we are of the opinion as the following:

May Allah SWT give us taufiq and hidayah to be His God-fearing servants. Ameen.