IRSYAD AL-FATWA SERIES RAMADAN EDITION #173: THE RULING OF SLEEPING ALL DAY IN RAMADAN 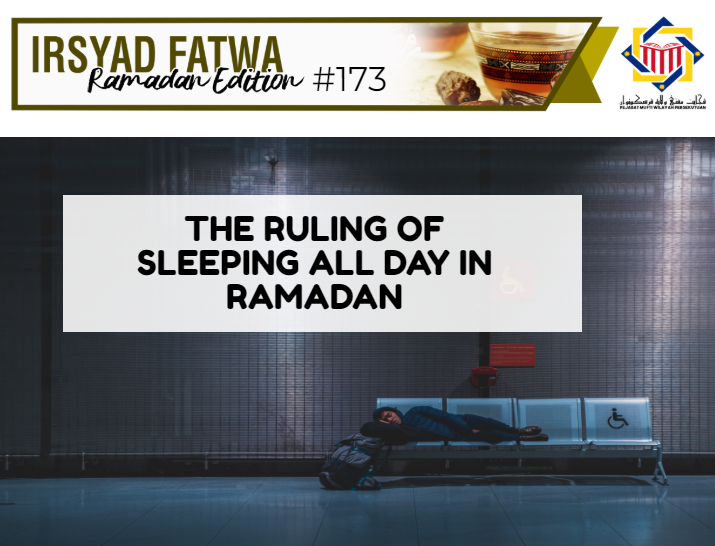 Assalamualaikum. I would like to ask about a person who sleeps after suhoor until it is almost Asr, then, he wakes up to pray Zuhr and Asr, and then he continues to sleep until it is almost time to break his fast. When he is advised, he answered that sleeping in the month of Ramadan is an ibadah. Is his fasting valid? Hope for an explanation.

Every (good) deed of the son of Adam would be multiplied, a good deed receiving a tenfold to seven hundredfold reward.

Coming back to the question asked, pertaining to sleeping all day whilst fasting, this will not invalidate fasting because it is not included among the invalidators of fasting. Imam al-Nawawi said:

And if one sleeps all day, then his fasting is valid according to a sahih and known opinion

The same is stated by Imam Syihab al-Din al-Ramli that it does not harm (towards his fast) if he sleeps soundly until daytime ends according to a sahih opinion. This is because he is included under those obligated by syara’ (to fast). Then, when he is awakened or awakes from his sleep, it is wajib for him to replace the missed prayer during his sleep, as it is not missed due to being unconscious. (See Nihayah al-Muhtaj ila Syarh al-Minhaj, 3/176)

However, the action of sleeping all day in Ramadan is an act which decreases its reward as well as contradicts the ethics and losing the hardships in fasting. This is clear that feeling hardships in the month of Ramadan is one of the wisdom in fasting where Allah SWT educate His slaves to always preserve themselves and their desire from fulfilling what they want as well as remembering Allah SWT.

This is mentioned by Imam al-Ghazali:

In fact, among the ethics (in fasting) is to not sleep too much during the day, so that one will experience hunger, thirst and energy loss. So then his heart will become pure.

The same, Dr Muhammad al-Zuhayli stated, among actions which are makruh to do whilst fasting is sleeping too much and speaking of unbeneficial things. This is because both of them will decrease the reward of fasting. (See al-Taqrirat al-Sadidah, pg. 448)

Coming back to the question presented as well as the explanation and scholarly texts given, we can conclude that the act of sleeping all day in Ramadan is among the actions which are makruh, but the fasting is still valid for the day. However, it is best for one to multiply his good deeds and ibadah to Allah SWT in this month of Ramadan.

And if one sleeps with the intention that his sleep may give some rest for his body, so that he may do even more ibadah, then his sleep may become an ibadah for him due to his intention. This is what is meant generally with the sleep for a fasting person is an ibadah because he sleeps whilst fasting. This is already explained by us in an article entitled IRSYAD AL-HADITH SERIES 370: SLEEPING IS A FORM OF WORSHIP FOR THOSE WHO FAST

Hence, in this month of blessings, our advice is to increase the acts of worship and good deeds so that all our deeds in this Ramadan are accepted by Allah SWT as well as making this Ramadan better than before.