IRSYAD FATWA RAMADHAN EDITION SERIES 176: WHAT IS THE RULING OF TAKING COVID-19 VACCINE DURING RAMADHAN? 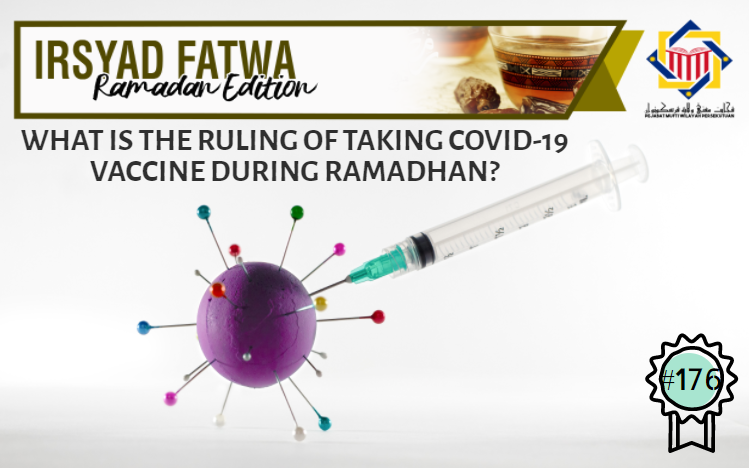 Assalamualaikum. I would like to ask on the ruling of taking covid-19 vaccine during Ramadhan. Does it invalidate fasting?

The ruling of taking the injection of covid-19 vaccine on the daytime of Ramadhan is permissible and does not invalidate fasting because the injection does not go through an open cavity.

All acts of worship are tied with its conditions and matters set by shara’ like obligatory conditions, invalidators, sunnah actions and etc. The same goes for the worship of fasting which is obligatory upon all Muslim individuals who already reaches puberty. Fasting is just like other acts of worship, it is sanctioned based on Allah SWT’s saying:

O you who have believed, decreed upon you is fasting as it was decreed upon those before you that you may become righteous –

In discussing this issue, generally, actions that invalidate fasting are when the conditions of fasting are not fully fulfilled, or one of the requisites of fasting are missing like haid, nifas, inserting something into the body and etc. This is as mentioned in al-Mausu’ah al-Fiqhiyyah al-Kuwaitiyyah:

“Matters invalidate fasting in general, all matters which do not complete the conditions, or one of the requisites is missing like being an apostate, experiencing haid and nifas. Committing actions invalidating the fasting like eating, drinking and the like. The same goes for inserting something from outside of the body into the cavity of the one who fasts”

The scholars explain that among matters that invalidate fasting is inserting something into the body through open cavity like nostrils and mouth. This is as explained by Imam al-Nawawi in his book Raudah al-talibin:

The same goes for injection containing nutrients or to fluid the body, so it invalidates fasting although the injection does not go through the open cavity. This is different from the opinions of the scholars as concluded in detail by Sheikh Hassan al-Kaf in his book al-Taqrirat al-Sadidah:

Meaning: The Ruling of Injection (on the daytime of Ramadhan): Permissible in the situations of dharurat (exigent), but the scholars have differing opinions on the invalidation of the fast into three opinions:

According to the opinion of Sheikh Yusuf al-Qaradhawi, this injection does not invalidate fasting even if the injection is administered on the daytime of Ramadhan because the injection is not included under the category of eating or drinking in the perspective of shara’. [2]

Coming back to the presented question and discussion, it can be concluded that the ruling of administering covid-19 injection on the daytime of Ramadhan is permissible and does not invalidate fasting because the injection does not go through an open cavity.