IRSYAD FATWA SERIES 86 RAMADHAN EDITION: IS IT PERMISSIBLE TO PERFORM OTHER SUNNAH PRAYERS AFTER WITIR PRAYER? 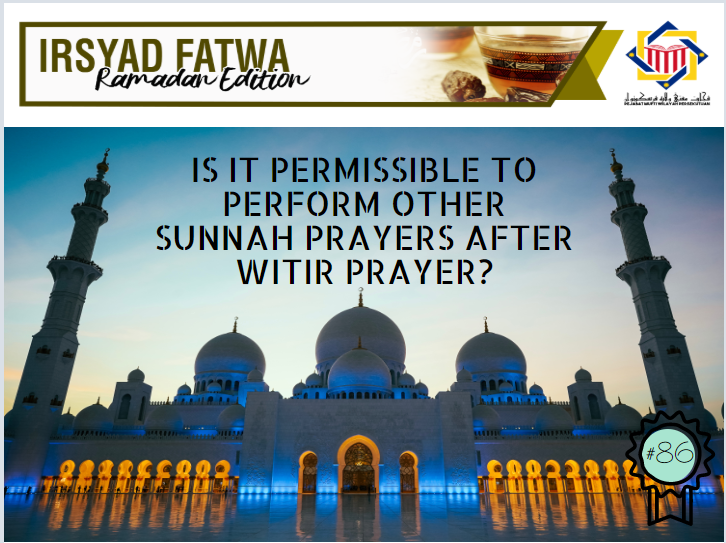 “Whoever prays Qiyam with the Imam until he finishes, Allah (SWT) will record for him the Qiyam of a (whole) night.”

Next, to answer the question asked, is it true that it is impermissible to perform other types of sunnah prayer after witir with the imam? In this issue, there are two opinions:

This is the opinion of most Hanafiah, Malikiyyah, Hanabilah scholars as well as the recognized opinion of Syafi’eyyah scholars. This is also the opinion of al-Nakha’ie, al-Auza’ie, ‘Alqamah and it is also a narration of Abu Bakar, Sa’ad, ‘Ammar, Ibn ‘Abbas and ‘Aisyah R.Anhum.

This opinion is based on the following hadiths:

“He would sit, make mention of Allah, supplicate Him and then utter the salutation so loudly that we could hear it.”

“The Prophet (ﷺ) used to pray two short Rak’ah after Witr, sitting down.”

As for the prohibition of repeating witir in one night, it is stated in the hadith from Talq bin Ali, the Prophet PBUH said:

“There are no two Witr in one night.”

This is also the opinion of al-Imam Ibn Hazm Rahimahullah where he said; for those who has performed witir in the early night and sunnah prayer afterwards, it is permissible and it is unnecessary to be repeated. (See al-Muhalla. Dar al-Fikr, 2/91)

This is also stated by al-Imam al-Tirmizi Rahimahullah where he referred to the opinion of Sufyan al-Thauri, Ibn al-Mubarak which is the strongest opinion according to him. (See Sunan al-Tirmizi, 2/330)

This is the opinion of some Syafi’eyyah scholars as narrated by ‘Uthman, ‘Ali, Usamah, Ibn ‘Umar, Ibn Mas’ud and Ibn ‘Abbas R.Anhum.

The above discussion is an argument made from the hadith of the Prophet PBUH:

“Make the last of your prayer at night a witr.”

According to the above discussion, in our opinion there is no issue for those who wishes to perform other sunnah prayer after the witir prayer. Furthermore, it is best to stay and pray together with the imam until the end to reap the rewards of as if praying the whole night. This is in accordance with the hadith narrated by Muslim, Ahmad and al-Tirmizi. This is the resolution and solution for this issue as written in al-Mu`tamad fi al-Fiqh al-Syafi`e.