IRSYAD FATWA SERIES 82 RAMADHAN EDITION: IS IT TRUE THAT THE PROPHET PBUH DID NOT FAST DURING HIS TRAVELS? 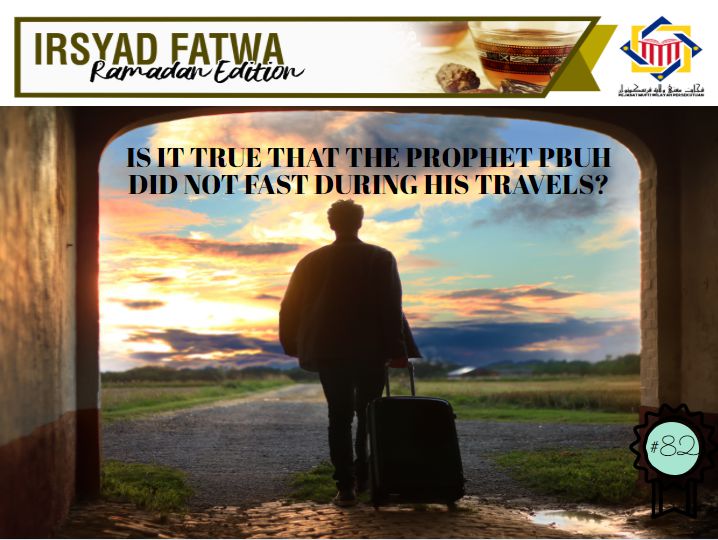 Assalamu‘alaikum SS Datuk Mufti. Is it true that it is sunnah of the Prophet PBUH to not fast during Ramadhan when he was traveling?

We will start the answer regarding this issue explaining that travels in the context of this discussion is traveling for approximately 85 kilometers or more during Ramadhan. Thus, it is permissible for anyone traveling to break his fast and it is obligated for him to replace (qadha’) his fasting. It is in accordance with the statement of Allah SWT:

“And whoever is ill or on a journey - then an equal number of other days.”

The travel must be for something that is permissible in Islam, not a sin, or anything that contributes to sin. Another condition for the travel is, he must depart before sunrise. Hence, if he fast while he is residing somewhere, then start his travel during the day, it is prohibited for him to break his fast. It is prohibited for him to invalidate his worship of fasting. This is in accordance with:

“And do not invalidate your deeds.”

It is permissible for people who are traveling in the month of Ramadhan to fast. He is given a choice of whether he wants to fast or break his fast. This is in accordance with a hadith where 'A'isha (Allah be pleased with her) reported that Hamza b. 'Amr al-Aslami asked the Messenger of Allah (ﷺ) about fasting on a journey, and he (the Holy Prophet) said:

“Am I (obligated) to continue my fast? The Prophet PBUH answered: Fast if you like and break it if you like.”

However, if fasting does not hinder his travels, then it is prioritized for him to continue with his fasting. This is based on the hadith from Anas RA, where he said:

This is supported by the statement of Allah SWT:

“But to fast is best for you,”

It is prioritized to continue with the fast to prevent it from being forgotten or if something unexpected will prevent him from replacing his fast in the future.

However, if fasting will trouble or hinder him in his travels, then it is prioritized for him to break his fast. From Jabir RA Allah's Messenger (ﷺ) was on a journey and saw a crowd of people, and a man was being shaded (by them). He asked,

"What is the matter?" They said, "He (the man) is fasting." The Prophet (ﷺ) said, "It is not righteousness that you fast on a journey."

“We set out with Allah's Messenger (ﷺ) on one of his journeys on a very hot day, and it was so hot that one had to put his hand over his head because of the severity of heat. None of us was fasting except the Prophet and Ibn Rawaha.”

“Allah's Messenger (ﷺ) set out from Medina to Mecca and he fasted till he reached 'Usfan, where he asked for water and raised his hand to let the people see him, and then broke the fast, and did not fast after that till he reached Mecca, and that happened in Ramadan." Ibn `Abbas used to say, "Allah's Messenger (ﷺ) (sometimes) fasted and (sometimes) did not fast during the journeys so whoever wished to fast could fast, and whoever wished not to fast, could do so.”

Hence, in our opinion, the sunnah of the Prophet PBUH in this issue is not of a single form, but the ruling of fasting for travelers actually depends on the situation. Sometimes, it is prioritized to continue with one’s fasting. This is in accordance with the Islamic legal maxim stated by Imam al-Qarafi:

“Forsaking the facilitations in most types of worships is prioritized.” Refer al-Furuq (1/120)

On another hand, sometimes it is prioritized to break one’s fast, especially for cases that involve hardships and harm. If the purpose is for the benefit of the ummah, such as wars and humanitarian missions, where fasting will hinder him from completing his noble purpose, then it is prioritized for him to break his fast and vice versa. This is what has been stated by scholars, where they are thorough in their understanding of hadiths and in explaining this issue, which makes it easier for us to apply it in our lives.