IRSYAD AL-FATWA SERIES 172: THE RULING OF USING ROMANI LETTERS TO WRITE THE QURAN 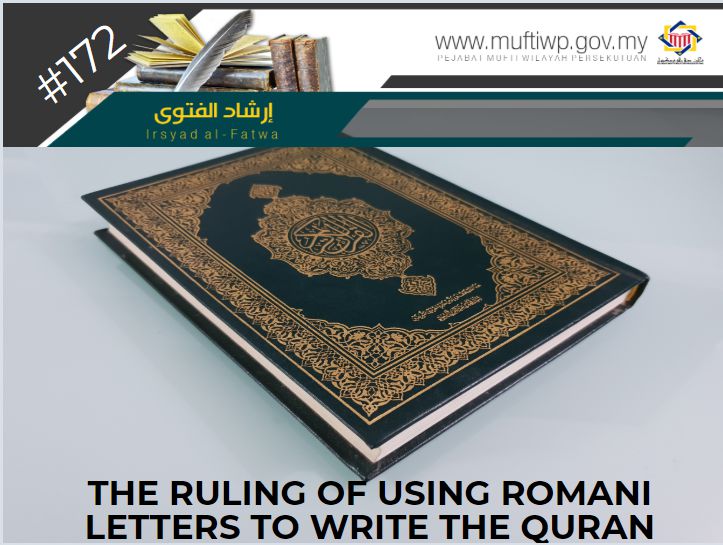 What is the ruling for writing the Quran using Romani letters practised today?

This issue falls under the issue of translating the Quran. According to Manahil al-Irfan fu Ulum al-Quran, translation of the Quran is defined as:

“The transcription of the meaning for the words of the Quran that originates from Arabic by preserving its purposes with words from other languages conveying the same meaning and purpose of the Quran.” Refer Manahil al-Irfan fi Ulum al-Quran (2/144)

We divide the translation of the Quran into three:

The explanation for the above three divisions of Quran translation are discussed as follows:

“If a thorough translation is done following the exact words in the Quran, it is considered as a literal, verbal or exact translation of the Quran.”

Literal (harfiah) translation of the Quran is prohibited, for Arabic is a unique language that surpasses any other languages, in terms of its arrangements and meanings that it encompasses, no one is able to create anything comparable to the Quran, whether it is from Arabic language or any other languages. Allah SWT states:

“And indeed, the Qur'an is the revelation of the Lord of the worlds. The Trustworthy Spirit has brought it down. Upon your heart, [O Muhammad] - that you may be of the warners - In a clear Arabic language.”

“And thus, We have revealed to you an Arabic Qur'an,”

"It is only a human being who teaches the Prophet." The tongue of the one they refer to is foreign, and this Qur'an is [in] a clear Arabic language.”

Imam Ibn Kathir Rahimahullah (w.774H) answers the musyrikin’s claims in the above verse in his commentaries: “How can a person (ie the Messenger of Allah) brings the Quran, when wherein the Quran contains the fluidity of speech and pragmatic (balaghah), complete and comprehensive meanings, and the most meaningful and complete of books surpassing all the other books which have been revealed before it, and he is said to have learn it from an ajam (non-Arab) man. No sane person would say such a thing!”

The above evidences explain why Allah SWT revealed the Quran in Arabic, for the art and arrangement of the language surpasses humans’ speech. If it is translated into another language, then the miracle of the Quran would not be able to be captured, and this is what happens to the Jews and Christians where their priests or ministers change the words of Allah SWT as they please. As a result, there are numerous translations of the Bible and Torah that contradicts each other after they are translated to Hebrew.

In al-Itqan fi Ulum al-Quran, Imam Jalaluddin al-Suyuti wrote: “(Imam) Malik was once asked: Is it permissible for the mushaf to be written using hija’iyyah letters just as have been practised by the people? He answered: It is not permissible, unless if it is written using the first script (which is the Rasm Uthamani script). This statement is narrated by al-Dani in al-Muqni’, where he then adds: All Muslim scholars agree with the opinion of Imam Malik.”

The same is stated by Imam Ibn Hajar al-Haithami (w.974) in al-Fatawa al-Fiqhiyyah al-Kubra (1/38): “When the scholars have reached an agreement, just as have been stated in this case, it is prohibited for someone to write the word riba with the letter alif which is الربا, (but in the mushaf using Rasm Uthmani it is written as الربوا which is in accordance to the hija’iyyah letters’ method of writing), then in cases of writing using a language that differs in term of its letters, then the prohibition is greater.”

He continued saying, “And for writing using ajam (non-Arabic) letters, it is considered as an interference in the verses of the Quran (for it is a language that surpasses all other languages) making it an act of al-tahaddi – which an act of challenging the Quran.”

Hence, the agreed opinion in mazhab al-Syafie stated in Fath al-Mu’in is, it is prohibited to write the Quran using non-Arabic letters even if it does not change its meaning. Refer I`anah al-Talibin (1/83).

“If the Quran is not translated literally, it is named as the translation of the Quran through commentaries or meanings.”

This type of translation is permissible and encouraged in syarak. In truth, the commentaries of the Quran do not use the Arabic language. This is on the condition that it follows the methods of commentaries while preserving the meaning of the Quranic verses.

Syeikh Abdul Qadir al-Mandili (w.1385H) Rahimahullah said: “And the verses of the Quran in the commentaries (matan aqidah Tahawiyyah) is not translated, but rather I quoted its interpretation (tafseer).” In the end note of his book, it is stated; ‘For it is prohibited to translate the Quran.’ Refer Perisai Bagi Sekalian Mukallaf (pg. 4)

This type of translation is the writing of the Arabic texts of the Quran in another language to ease the readers to enunciate the Arabic words. Some Islamic scholars ruled it permissible. Imam Syihabuddin al-Ramli (w.957H) was asked whether it is prohibited to write the Quran in the Indian language (using Indian letters). He answered that it is not prohibited to write like that for it does not change the Quran itself. However, translating it into another language is prohibited for it changes the Quran. Refer Fatawa al-Ramli (1/23).

In modern usage, this method is known as transliteration. According to 4th Edition of Kamus Dewan, transliteration is defined as: “The change of letters (for example Arabic words) with letters that have the same sound in other languages (for example the Romani letters).”

Al-Azhar Fatwa Council was asked about the permissibility of writing the Quran using letters from languages other than Arabic to help non-Arabs to read the Quran. The council then answered: “There is no doubt that Latin letters have weaknesses and are inadequate to correspond to Arabic, thus, Latin script is not comparable to explain the Arabic script. If al-Qur'an al-Karim is written with the letters using the Arab system (ie transliteration), it will be insufficient and there will be deviation in its meaning, which will result in the alteration and damage of the meaning of the Quran. Syarak evidences has also ruled it obligatory to keep al-Quran al-Karim from everything that could attack, change and deviate it. It has been agreed by the early and contemporary Islamic scholars that anything that could lead to the alteration of al-Qur'ān would lead to the misappropriation of its utterance and conversion in its meaning and it is prohibited.” Al-Majallah al-Azhar (7/41)

The 24th Muzakarah of Fatwa Committee of the National Council for Islamic Religious Affairs Malaysia met on June 5-6, 1989, discussed the Writing of the Qur'anic Verses with Roman Letters. The Muzakarah has decided that it is prohibited to write or use any part of the Qur'anic verse with a non-Arabic text or non-Al-Quran script.

After examining each view of muzakarah members and the arguments submitted, Muzakarah of the Negeri Sembilan Fatwa Committee No. 07 / 2016-1437H convened on 25 August 2016 or 22 Zulkaedah 1437H has agreed on the decision of the 24thMuzakarah of Fatwa Committee of National Council on the Ruling of the Writing of the Qur'anic Verses with Roman or Latin Alphabet with the following clauses:

After reviewing the above statements, in our opinion, the original ruling of writing the Qur'an using Roman letters is prohibited. The reason is, all scholars; salaf and khalaf, have agreed that the Qur'an should be written using Rasm Uthmani's method. This is to prevent any insufficiencies and aberration of the utterance of the verses which leads to the change or damage of the meaning of the verses because the Quran itself is revealed in Arabic and that is a part of its miracle.

However, there are some situations where such writing is justified. Syeikh Muhammad Abdul Azim al-Zurqani (w.1367H) said: "Our scholars have criticized the act of writing al-Quran with letters which are not Arabic. Upon this provision, it is obligatory for a person, when he is translating the Quran into any language of any kind to include the original Quranic verses written in Arabic so that no abatement and misappropriation of the words that may lead to change and damage to its meaning." Refer Manahil al-Irfan fi Ulum al-Quran (2/134)

The following are the principles that should be followed:

If all of the above principles are followed, then writing the Quran using Roman letters is permissible. May Muslims around the world be able to learn and preserve the Quran through this effort and may all of us be among the successful people in this world and the hereafter. Amin.