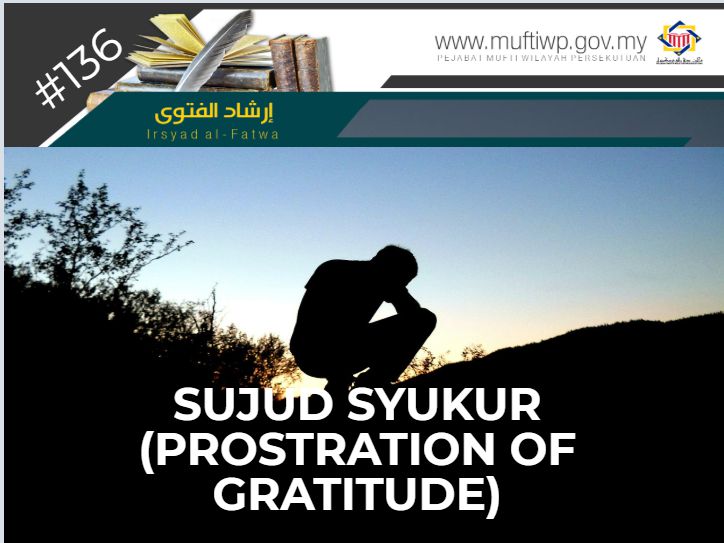 Can you explain how does one perform sujud syukur? Do we need to be in the state of wudhuk and face the qibla?

It is sunnah to perform sujud syukur or prostration of gratitude when we are blessed by Allah SWT, such as the birth of our child, when our sustenance increases, we are promoted, we excel in our examinations and others. Furthermore, it is also sunnah to perform sujud syukur if we are saved from a disaster, such as accidents, earthquakes and others. This is the opinion of the scholars of mazhab al-Syafie’ as well as the imam himself (Muhammad bin Idris al-Syafie’), the scholars of mazhab Hanbali as well as the imam himself (Ahmad bin Hanbal), Ishak, Abu Thaur and Ibn al-Munzir. While al-Nakhai’e, Malik and Abu Hanifah ruled sujud syukur as makruh (undesirable) [1]. However, there are some Malikiyyah scholars that state sujud syukur as sunnah.

The Commandment of Sujud Syukur

The evidence of the commandment of sujud syukur is a hadith of the Prophet PBUH narrated by Abu Bakrah RA:

“When anything came to the Prophet (ﷺ) which caused pleasure (or, by which he was made glad), he prostrated himself in gratitude to Allah.”

In fiqh books of mazhab Syafi’e and Hanbali, sujud syukur is perform in the same way as sujud tilawah (prostration of recitation) outside of prayer. Thus, when someone want to perform sujud syukur, he must first take his ablution (wudhuk), cover the aurah, his body, his clothes and the place he is going to perform the sujud must be clean from any najis (impure things in syarak), and finally, he has to face the qibla. [2]

To perform sujud syukur one must: [3]

Sujud Syukur Without Wudhuk Or Not Facing the Qibla

There is also a discussion among scholars regarding the way to perform sujud syukur without ablution or facing the qibla. This is the opinion of some malikiyyah scholars and the predecessors (salaf). [4] This is also the opinion of Ibn Jarir al-Tabari, Syeikh al-Islam Ibn Taimiyyah [5], Ibn Qayyim [6], al-Syaukani [7] and al-San’ani [8].

Their reasonings and justifications for their opinion are as the following:

In this issue, we are inclined towards the opinion that states that it is permissible to perform sujud syukur without wudhuk or facing the qibla. The reason is, there is no evidence that commanded the ablution or the facing of qibla.

It is permissible to immediately perform sujud syukur when someone receives good news, such as a promotion, birth of a child or excellent results in exams or when someone is saved from disasters such as an accident or an earthquake.

It is also not an issue if he chooses to follow the opinion that states ablution and facing the qibla is necessary, for it is a debatable subject.

May this explanation give us understanding and guidance when we want to perform sujud syukur. Wallahua’lam.