IRSYAD AL-FATWA SERIES 132 : IS THE PRAYER OF A WOMAN VALID IF SHE DOES NOT WEAR TELEKUNG? 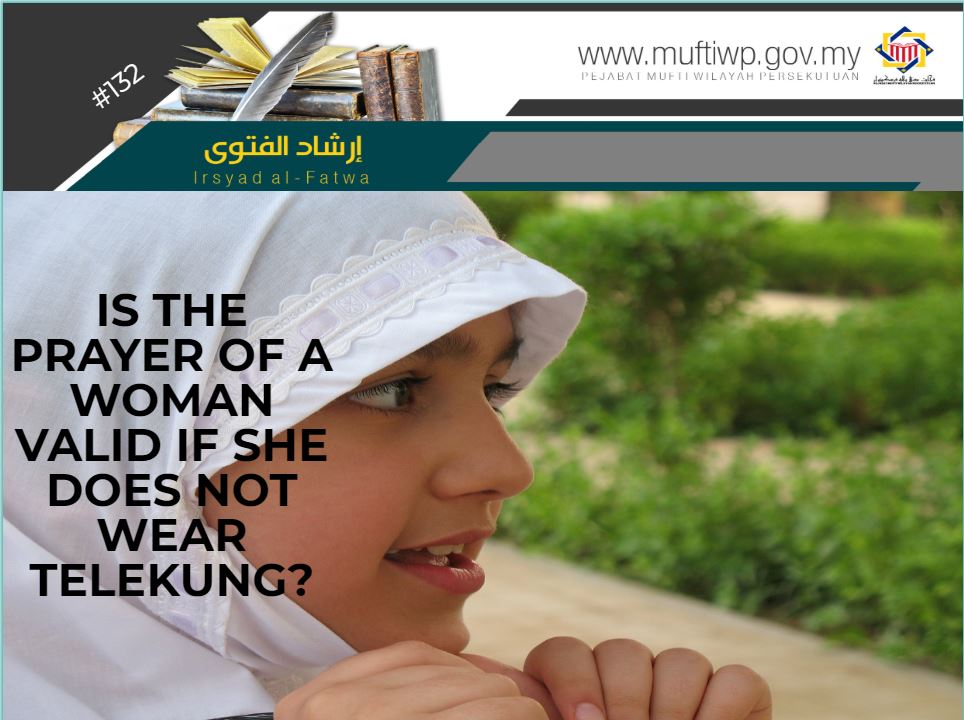 Is the prayer of a woman valid if she does not wear telekung?

In al-Majmu’, al-Imam al-Nawawi stated that covering aurah in prayer is obligatory according to the consensus of scholars, whether it is in front of others or alone.

As for the aurah of woman in prayer, scholars of mazhab Syafi’e said it is her whole body except her face and hands; from fingers up to the wrists. [1] this is in accordance with Allah SWT’s statement:

“Do not expose their adornment except that which [necessarily] appears thereof,”

The aurah of woman in front of other ajnabi men (Muslim or non-Muslim) outside of prayer is the same as when she is praying; which are all parts of her body except the face and hands.

‘Aisyah R.Anha narrated a hadith from the Prophet PBUH:

“The solat (prayer) of a woman who has reached the age of menstruation is not accepted without a Khimar (covering of the head),”

In another hadith, ‘Aisyah R.Anha narrated an incident where women during the time of the Prophet PBUH would went out to join the congregational prayer with the Prophet PBUH:

“Allah's Messenger (ﷺ) used to offer the Fajr prayer and some believing women covered with their veiling sheets used to attend the Fajr prayer with him and then they would return to their homes unrecognized.”

The above hadith indirectly tells us of how the women during the time of the Prophet PBUH dressed themselves when they went to pray and went back home unrecognized by anyone.

The Ruling of Praying Without Wearing Telekung

According to the above discussion, the ruling for the prayer of a woman praying without wearing telekung is valid as long as she covers her aurah.

We are not denying that telekung covers the aurah of a woman completely as stated by syarak, however if a woman has already covered her aurah, then it is not necessary for her to wear telekung to perform her prayer.

It should be reminded that covering aurah means wearing loose clothing which does not reveal the shape of the body, not wearing thin or see-through clothing that will make the skin colour visible and covering the chest and feet. Furthermore, the aurah of a woman is the same while she is praying or when she is in front of other ajnabi men outside of prayer.

May this explanation give us understanding and may Allah SWT bless us with the ability to practise it in our daily lives.