IRSYAD AL-FATWA SERIES 112 : CAN THE SOUL OF THE DECEASED RETURN? 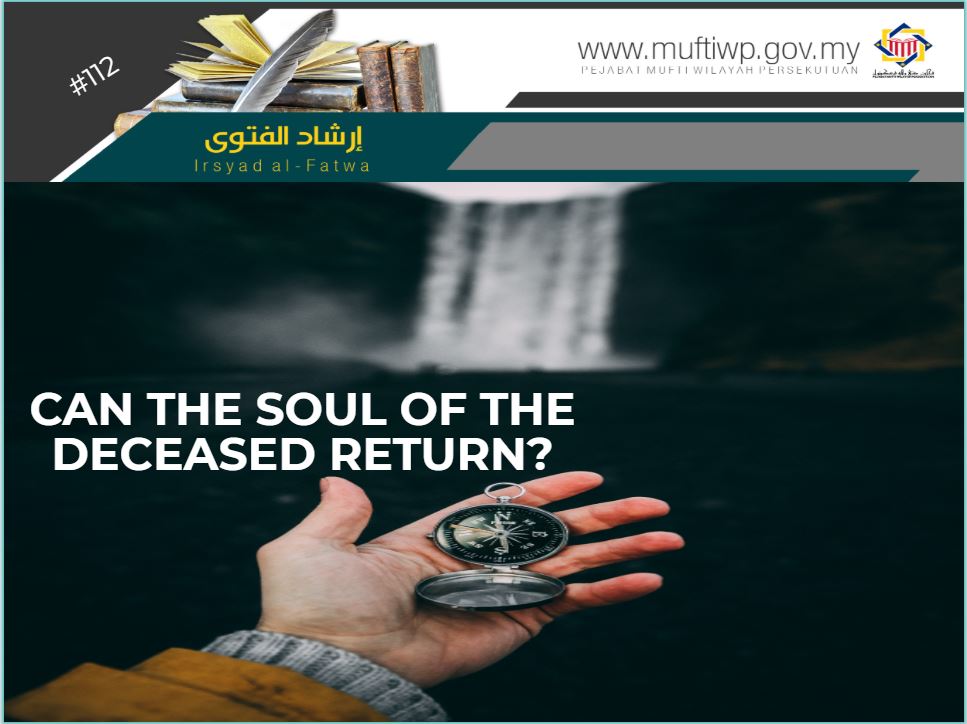 Can the soul of a deceased return to this world?

First and foremost, we would like to present a statement of Allah SWT:

“And they ask you, [O Muhammad], about the soul. Say, "The soul is of the affair of my Lord. And mankind has not been given of knowledge except a little."

Syeikh Abdul Rahman al-Sa’di Rahimahullah state in his commentaries, Taysir al-Karim al-Rahman, the above verse state the weakness and shortcoming of humans, for our minds could not comprehend or reach certain things. Thus, Allah SWT commands the Prophet PBUH to surrender the affairs of soul to Allah SWT when asked about it.

Hence, we try to discuss this issue referring to sound evidences and commentaries of renowned Islamic scholars. May this discussion benefit us all.

There are several definitions of soul according to Taj al-‘Urus, some of them are:

Thus, we can conclude that souls are minute matter that are in humans and animals.

The Truth Regarding Souls

Everyone that has passed away, their souls would never be able to return to this world, whether to return to visit their family members, for revenge or other humanly acts while they are alive, or whether the soul is the soul of a good person or not.

Here, we include the evidences relating to this issue:

This is in accordance with the statement of Allah SWT:

“That I might do righteousness in that which I left behind." No! It is only a word he is saying; and behind them is a barrier until the Day they are resurrected.”

Al-Imam Ibn Jarir al-Tobari Rahimahullah (w.310H) wrote a narration from Mujahid Rahimahullah (a tabi’en and a student of Ibn ‘Abbas R.Anhuma) who opines that in the above verse, barzakh is a hijab (a barrier) between the deceased and our world, making it impossible for them to return.

“Allah takes the souls at the time of their death, and those that do not die [He takes] during their sleep. Then He keeps those for which He has decreed death and releases the others for a specified term. Indeed, in that are signs for a people who give thought.”

There is a hadith from al-Imam Ahmad in his Musnad that relates to this issue. Narrated by Jabir RA:

“The Messenger of Allah (ﷺ) said: ‘O Jabir, shall I not tell you what Allah said to your father?’ I said: ‘Yes.’ He said: ‘Allah does not speak to anyone except from behind a screen, but He spoke to your father face to face and said: “O My slave, ask Me and I shall give you.” He said: “O my Lord, bring me back to life so that I may be killed for Your sake a second time.” He said: “I have already decreed that they will not return (to the world after death).”

The above hadith clearly states that a deceased person will never be able to return to this world because it has been decreed by Allah SWT.

After reviewing the above evidences and scholars’ opinions, we would like to reiterate that the soul of the deceased cannot return to this world for it is now in another world known as barzakh, as we have discussed above.

Sound evidence and the narration from Jabir RA are the concluding factor, as well as the commentaries of scholars regarding the Quranic verses supporting the fact that the souls of the dead cannot return to this world.

As for the case of whether the souls of the deceased hear the words of the people that visit his grave, we have answered it in Irsyad al-Fatwa Series 106 [1] and readers can refer to it for answers.

May this explanation help us understand the true Islamic teachings. Wallahua’lam.