IRSYAD AL-FATWA SERIES 110: THE PROSTRATION (SUJUD) OF THE PROPHET ﷺ 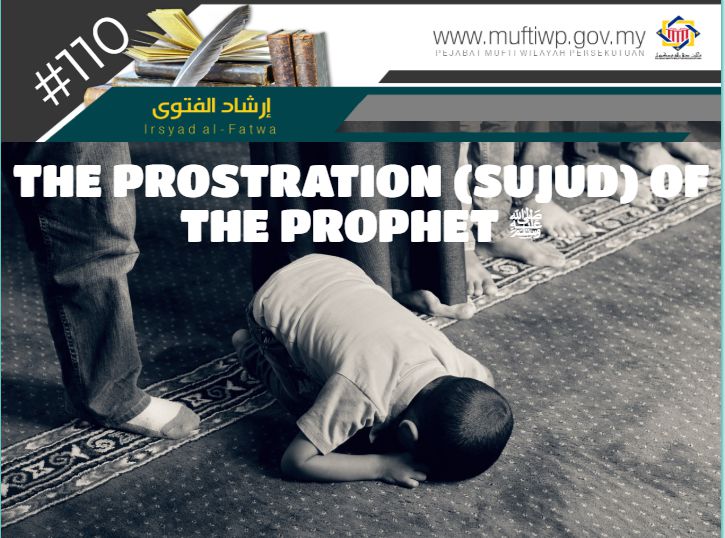 How did the Prophet ﷺ performed his prostration in prayer? When he was kneeling down for prostration, did he place his hands or knees on the ground first?

Alhamdulillah, praise and thanks to Allah for the countless blessings He has blessed us all with. Blessings and salutations to the Prophet Muhammad ﷺ, his wives, his family, companions and all those that follow his teachings to the day of judgement.

A man entered the mosque and started praying while Allah's Messenger (ﷺ) was sitting somewhere in the mosque. Then (after finishing the prayer) the man came to the Prophet (ﷺ) and greeted him. The Prophet (ﷺ) said to him, "Go back and pray, for you have not prayed. The man went back, and having prayed, he came and greeted the Prophet. The Prophet (ﷺ) after returning his greetings said, "Go back and pray, for you did not pray." On the third time the man said, "(O Allah's Messenger (ﷺ)!) teach me (how to pray).". Then the Prophet ﷺ taught him the right way to perform prayer. From a part of the hadith, the Prophet said:

Hence, scholars of salaf and khalaf all agreed on the obligation of prostration in prayer referring to both the Quranic and prophetic evidences above.

There are evidences of the sanctioning of prostration in the Quran, hadith and scholarly consensus (ijmak). However, there are differing opinions regarding how the Prophet ﷺ performed his prostration. One of the issues in this discussion is how one should prostrate himself in prayer; should he start his prostration by placing his knees or hands first when he was kneeling down?

In this issue, there are two opinions:

Discussions on the First Opinion

“I saw that the Prophet (ﷺ) placed his knees (on the ground) before placing his hands when he prostrated himself. And when he stood up, he raised his hands before his knees.”

However, regarding the above hadith, al-Imam al-Daraqutni Rahimahullah said: “The hadith’s chain of narrators or transmitters (sanad) is as the following; Yazid (single narrator) narrated from Syarik (single narrator), in which he narrated from ‘Asim bin Kulaib. However, since it has been transmitted by a single narrator in the two layers of the chain of narrators (sanad) of the hadith, then this narration is considered as weak.”. Due to this, Syeikh Nasiruddin al-Albani Rahimahullah said the status of the hadith is dhoif (weak) and he details the discussion of the status of this hadith in his book Silsilah al-Ahadith al-Dho’ifah wa al-Maudhu’ah.

Another hadith that supports the first opinion is a hadith from Abu Hurairah RA:

“Indeed, the Prophet ﷺ prostrated placing his knees on the ground before his hands,”

As for the above hadith, scholars have criticized it because one of the narrators for this hadith is Ismail bin Yahya bin Salamah and (according to the biographical evaluation of the narrators of hadith), he is matruk (disregarded) (his narrations are not accepted). (See Tahzib al-Kamal fi Asma’ al-Rijal. Muassasah al-Risalah, 3/213)

There is a sound and strong sayings, actions and consent of the Sahabah (athar) from the actions of Umar RA which states:

“We have memorized the prayer of Umar and in his prayer, after his rukuk (bow) he placed his knees first for his prostration before his hands, just like a camel.”

According to the above evidences, scholars conclude the following opinions:

Discussions on the Second Opinion

The second opinion states that for prostration, the hands are placed on the ground before the knees. The evidence the scholars referred to is a hadith from Abu Daud:

“When one of you prostrates himself, he must not kneel in the manner of camel, but should put down his hands before his knees.”

The above hadith is discussed by al-Imam Ibn Qayyim al-Jauziyyah in his book Zaad al-Ma’aad, where he said in his opinion there is wahm on the narration (matan) of the hadith from Abu Hurairah. The beginning contradicts the end of the hadith. The reason is, the hadith commanded to not kneel down for prostration like a camel, but then ask to first kneel down with our hands before our knees (as if it contradicts the end of the hadith for a camel kneels down with its front legs first before its hind legs). Furthermore, al-Imam Ibn al-Qayyim said for the above hadith from Abu Hurairah, there is an inqilab (confusion in the matan), where the narration could probably be “and place both knees first before his hands.” (See Zaad al-Ma’aad. Muassasah al-Risalah, 1/217-218)

Moreover, there is a narration from Ibn Umar R.Anhuma where he placed both his hands first in his prayer for his prostration:

“The Prophet ﷺ did it like so, (placing both hands first before his knees).”

According to the above discussion, we would like to state that this is an issue of muktabar khilaf (accepted disagreements among the scholars), where both opinions are supported with evidences.

Hence, Syeikh Abd al-Aziz Marzuq al-Tarifi Hafizahullah stated his opinion in this issue before going detail in the discussions in his book, entitled Sifat Solat al-Nabi (The Characteristics of the Prayer of the Prophet):” Regarding the narration, there is no elevated (marfu’: a narration attributed to the Prophet PBUH) hadith found in this issue”

Here, we include the opinion of Syeikh Abd al-Aziz Marzuq al-Tarifi Hafizahullah discussing this issue in his book Sifat Solat al-Nabi (The Characteristics of the Prayer of the Prophet ﷺ), where at the end of his discussion he states: “There are extensive discussions by scholars regarding this issue and people should perform their prayer choosing either way that is suitable for them (whether to first place his knees or hands first on the ground for prostration). This is what is prioritized. Some people are full-bodied, while some are slender, thus, choose whichever that is easier for them. Hence, regarding this matter there is no final opinion about it.” (See Sifat Solat al-Nabi. Maktabah Dar al-Minhaj, pg. 130).

In our opinion, people are free to choose from the two opinions stated in the beginning of our discussion. Being rigid and inflexible by ruling one or the other as the correct way of prostration is an extreme opinion and would close the doors of intellectual discussions.

As for the scholars who have differing opinions regarding this issue, they have issued their ijtihad through their reason and thorough exertion of their mental faculty, trying to understand the evidences the way it should be understood. If after their great effort and ijtihad, they managed to conclude an accurate ijtihad then they would receive 2 rewards while if their ijtihad is inaccurate then they would receive 1 reward.