IRSYAD AL-FATWA SERIES 151 : THE RULING OF ATTENDING THE FUNERAL OF NON-MUSLIM 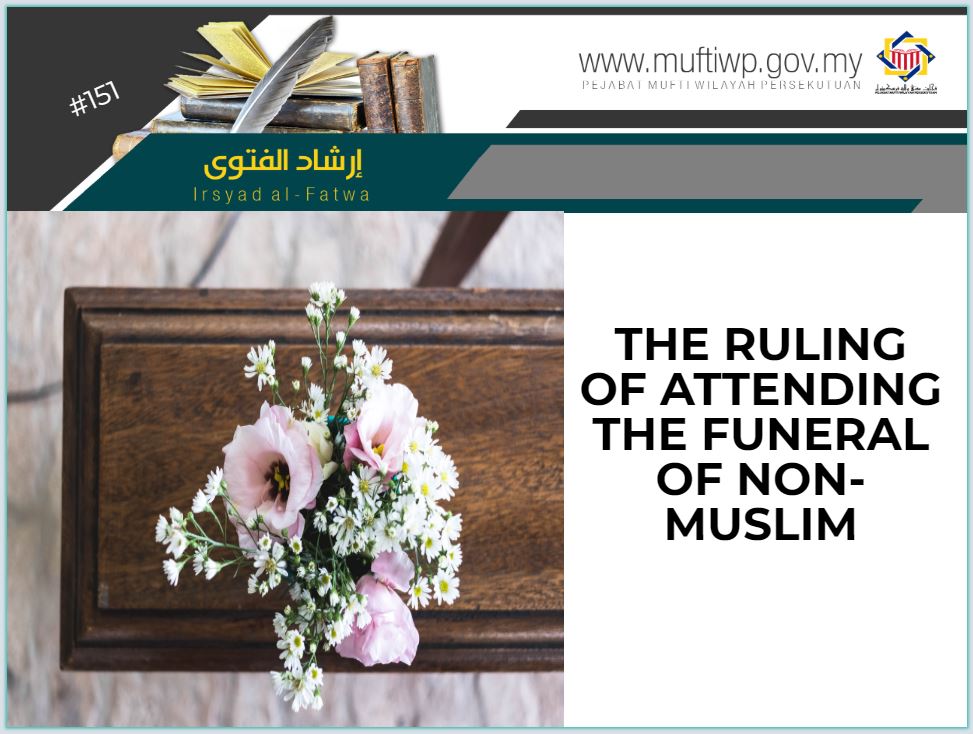 Can a Muslim attend the funeral of a non-Muslim?

There is no prohibition for Muslims to do good to non-Muslims and we are commanded to be just towards non-Muslims. Allah SWT states:

“Allah does not forbid you from those who do not fight you because of religion and do not expel you from your homes - from being righteous toward them and acting justly toward them. Indeed, Allah loves those who act justly.”

Bathing, Shrouding and Burying of Non-Muslim

Islam emphasizes on the relationship of people with each other, regardless of race or religion. We are commanded to emulate the Prophet PBUH, for he is the best example for us.

In another narration from Musnad Ahmad (1074), al-Suddi who are the narrator for the hadith said: “And Ali RA bathed Abu Talib, then he took a bath.”. Furthermore, the Prophet PBUH himself gave his robe to be used in the shrouding of Abdullah bin Ubay bin Salul, a hypocrite (munafiq) in his time. From Jabir bin Abdullah R.Anhuma, he said:

“When it was the day (of the battle) of Badr, prisoners of war were brought including Al-Abbas who was undressed. The Prophet (ﷺ) looked for a shirt for him. It was found that the shirt of `Abdullah bin Ubai would do, so the Prophet (ﷺ) let him wear it. That was the reason why the Prophet (ﷺ) took off and gave his own shirt to `Abdullah. (The narrator adds, "He had done the Prophet (ﷺ) some favour for which the Prophet liked to reward him.")

Thus, according to mazhab Syafie, it is permissible for a Muslim to bath, shroud and bury the body of a non-Muslim. Refer al-Mu’tamad fi Fiqh al-Syafie, 1/628; Al-Hawi al-Kabir (3/19).

Visiting the Grave of Non-Muslim

Syeikhul Islam Zakaria al-Ansari comments in Minhaj al-Tullab (summary of Minhaj al-Talibin written by Imam al-Nawawi): “It is permissible for Muslims to visit the graves of non-Muslims.” (Refer Fath al-Wahhab, 1/118). Imam al-Nawawi also permits Muslims to visit non-Muslims while they are still alive and visit their graves after they have passed away. According to him, if it is permissible to visit them after their death, then visiting them while they are alive is a priority. Refer Al-Minhaj, 7/45.

Syeikhul Islam Ibn Taimiyyah states an interesting fact: “…If a Muslim lives in a non-Muslim country that is hostile towards Islam, or a non-Muslim country that is not hostile towards Islam, it is not commanded for him to differentiate himself from the non-Muslim in religious rituals that are extensional and are not harmful to him. It is even encouraged or obligated for him to attend these rituals if there is benefit to Islam; such as inviting them to Islam, deepening the understanding of their religious rituals to educate other Muslims and preventing harm from falling on Muslims and other reasons permitted by syarak.” Refer Iqtida’ al-Sirat al-Mustaqim, 1/53.

This is the beauty of Islam, it can be practised in our lives where there are multi-religions, at the same time being firm with the principles of Islam. This is one of the proofs that shows Islam is not a restrictive religion, but an open religion, that is suitable for all communities in accordance to the Quran and Sunnah.

Conclusion
As a conclusion, attending the funeral of friends or family members that haven’t embrace Islam or who are not hostile towards Islam is permissible and are not prohibited. However, we should avoid being a part of their religious rituals. We advise the public to not be hasty in passing judgement on others that could damage our relationship as a multi-racial and multi religious country in Malaysia.