IRSYAD AL-FATWA SERIES 150 : THE RULING OF SELLING OR DONATING HAIR AND HAIR TRANSPLANT 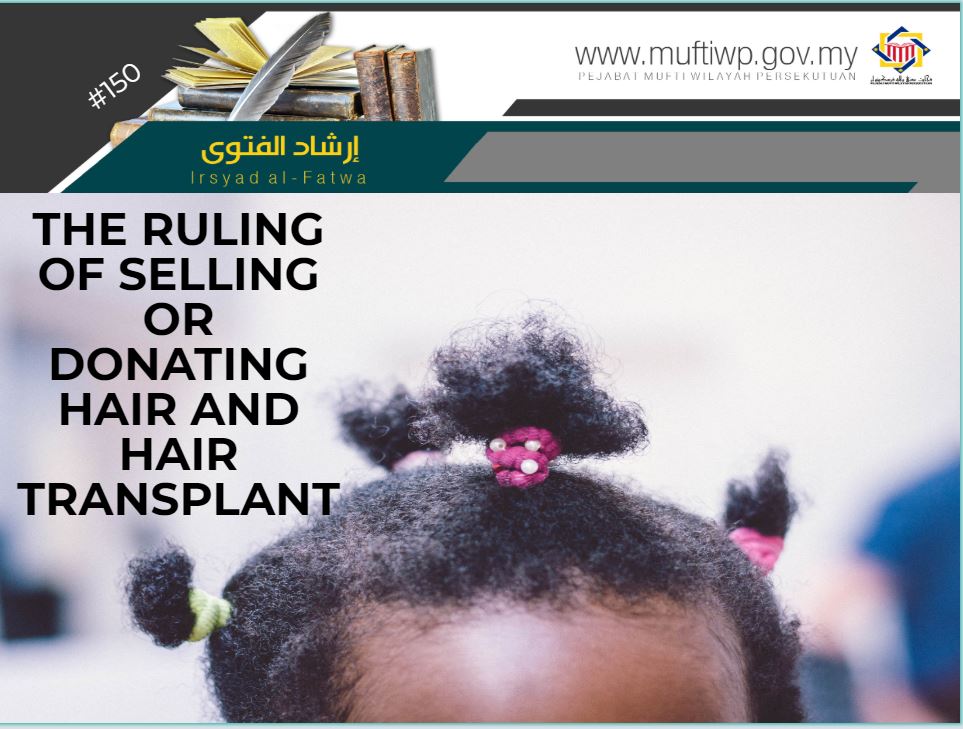 What is the ruling for selling or donating hair and hair transplant?

The Ruling of Selling Hair

The consensus of scholar states that the sale of human hair is prohibited, for all humans are honoured by Allah SWT. This is in accordance with the statement of Allah SWT:

“And We have certainly honoured the children of Adam,”

Al-Imam al-Nawawi wrote in his book al-Majmu’, it is prohibited to sell human hair, whether it is attached or cut. [1] The same is stated in other books from other mazhab, such as Al-‘Inayah Syarh al-Hidayah (Hanafi), Al-‘Adawi in his Hasyiah of Syarh Mukhtasar Khalil (Maliki) and al-Bahuti in his book Kasyyaf al-Qina’ (Hanbali).

The Ruling of Donating Hair

The ruling for donating hair is different according to the situation. If the hair is donated to be attached with other hair, then it is prohibited. This is in accordance with the words of the Prophet PBUH:

The word curse in the above hadith results in the prohibition of its ruling, for there are elements of deception and changing of Allah SWT’s creation.

Hence, anything that contributes to hair extensions, even if it is donating hair, then it is prohibited.

The Ruling of Hair Transplant

Originally, Islam permits any sort of adornment of which has not been prohibited by the Quran and the hadiths of the Prophet PBUH. The same applies for removing any form of defect on human body.

This is in accordance with a hadith of the Prophet PBUH, where he asked his companion to wear an artificial gold nose, replacing the original nose he lost during a war.

“Abdul Rahman ibn Tarafah said that his grandfather Arfajah ibn As'ad who had his nose cut off at the battle of al-Kilab got a silver nose, but it developed a stench, so the Prophet (ﷺ) ordered him to get a gold nose.”

Majma 'al-Fiqh al-Islami has decided that hair transplant is permissible for those who suffer from severe hair loss. It is based on the decision number 173 in 2007 for beauty surgeries which states:

"Syara’ permits beauty surgeries for dire situations and necessities of which its intended purpose is to remove defects due to fire, accidents, illness and others, such as repairing the skin by transplanting new skin ... hair transplant for those who experienced severe hair loss especially for women ".

"Having examined the evidences, arguments and views put forward, muzakarah has decided that Islam does not prevent its followers from performing treatments such as transplanting hair (on one’s head) with the purpose of removing defects, as long as it does not contradict and exceeds the limits set by syara'.

In this regard, muzakarah agreed that hair transplant is permissible on the condition that the hair used is his own hair, using pure ingredients without any elements of najis and there are no harmful effects."

Hence, it is clear that hair transplant is permissible according to the above fatwas on the condition that he uses his own hair and all the materials used is pure. Wallahua’lam.