IRSYAD AL-FATWA SERIES 148: WUDHU’ (ABLUTION) FOR PEOPLE EXPERIENCING INCONTINENCE (SALIS AL-BAUL) AND THE RULING OF THEM BEING AN IMAM 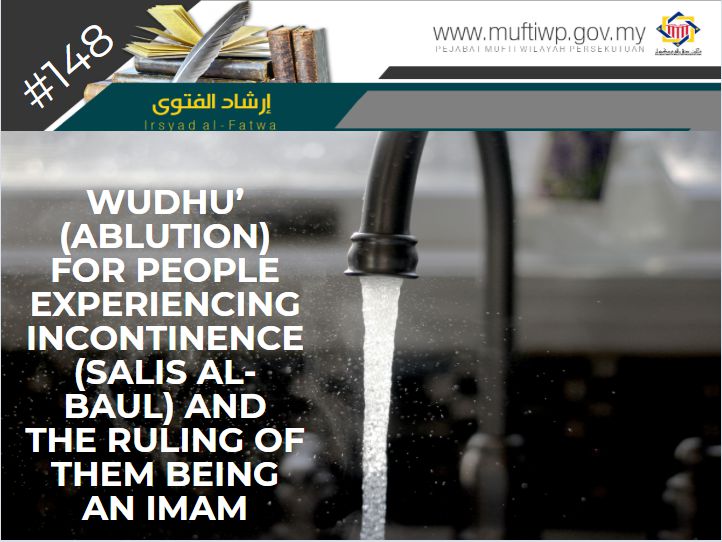 How would a person experiencing incontinence purify himself (wudhu’) and what is the ruling of him being an imam?

The jurists (fuqaha) state that anyone experiencing incontinence (سَلِسِ الْبَوْل ) is considered as the same as a woman who is experiencing istihadah (bleeding other than menstruation or giving birth). They are categorized as people with special ‘excuse’ or in other words, there are certain rules that are especially for them in term of purification.

Here, we include the guidelines set by the fuqaha regarding ablution for people who is experiencing incontinence:

The Ruling of a Person Experiencing Incontinence to Be an Imam

After learning about how people experiencing incontinence purify themselves, what is the ruling of them being an imam?

Al-Imam al-Nawawi Rahimahullah said that the accepted opinion state that the prayer is valid. This is the opinion of al-Imam al-Haramain, al-Imam al-Ghazali in his book al-Basit. The scholars used qiyas (analogical deduction) with people that used rocks for istinjak, or people who prayed while there are forgiven najis (impure) on their clothes or bodies. [2]