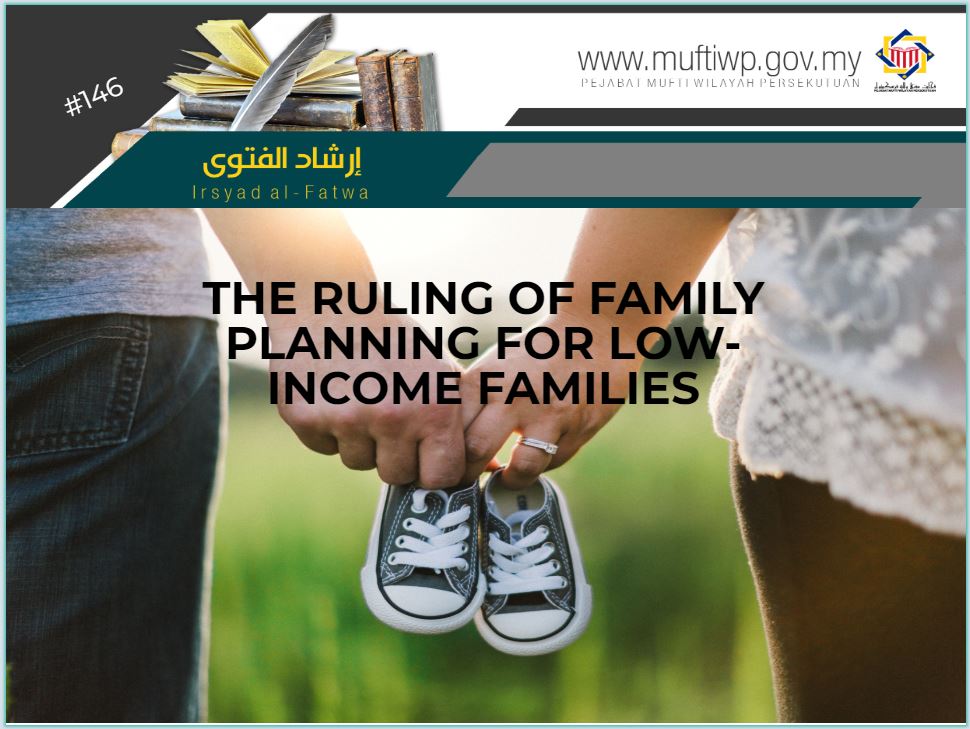 The scholars have differing opinions regarding the ruling for tanzim al-usrah or family planning due to poverty.

The scholars that prohibit family planning state the following evidences:

“And do not kill your children out of poverty; We will provide for you and them.”

Tanzim al-Nasal refers to the effort of distancing the period between pregnancies through medical intervention such as family planning pills or insertion of intrauterine device, or having intercourse during infertile period, wearing condoms, practise coitus interruptus and cleaning the semen from the woman’s vagina after intercourse. These methods are permissible on the condition of:

This is in accordance to an athar from Jabir RA:

“We used to practice coitus interruptus during the time of the Messenger of Allah when the Qur'an was being revealed.”

"It is better that you should not do it, for Allah has written whom He is going to create till the Day of Resurrection."

In a narration by Abu Said RA, he said:

“No soul is ordained to be created but Allah will create it.”

Hence, if Allah SWT wills a child to be born, then nothing and no one can stop it. Thus, the couple must be willing and responsible towards the child gifted to them.

Whereas, tahdid al-nasal is a permanent medical or surgical intervention of sterilization and abortion. These methods are prohibited for they fall under the category of changing Allah SWT’s creation (for sterilization) and murder (for abortion). This act also denies Allah SWT as the one who Provides for everyone, whether it is the parents or the child. It is also prohibited for unmarried man or woman. The exception for the prohibition of it is, for cases where the mother would face a high risk of health complications that could result in death due to being pregnant or giving birth. Hence, at the time abortion can be done before 120 days of fertilization or 106 days from the last day of menstruation.

According to Imam al-Ghazali, abortion is totally prohibited, even during the early stages of pregnancy for it is the basis of humans’ life. However, he states that it is permissible to practise coitus interruptus, if there are permissible reasons for it, which includes the factors of economy, wife’s health, and to maintain wife’s beauty to ensure prolonged love and care between the couple (to prevent divorce). He also states a sinful and unacceptable reason for family planning, which is the fear of getting a daughter. Refer Ihya' Ulum al-Din (2/52)

Majma 'al-Fiqh al-Islami Conference under the Organization of Islamic Cooperation (OIC) in Kuwait at 1-6 Jamadilakhir 1409 H equivalent 15 December 1988 M has decided, among others:

On May 1997, Syeikh ‘Atiyyah Saqr issued a fatwa through Dar al-Ifta’ al-Misriyyah, answering the question on sterilization for family planning due to health reasons or others for a certain duration. It is permissible on the condition that the reproductive ability is undamaged and he or she can reproduce again after the set duration. Thus, if the sterilization is absolute and permanent then it is prohibited, unless there is a desperate and serious danger or threat towards his or her life. Refer Fatawa Dar al-Ifta’ al-Misriyyah (47/10)

The 28th Malaysian Islamic Religious Council Fatwa Committee Muzakarah on 29 February 1991 discussed the Norplant Suspension System in the National Family Planning Program. Muzakarah has decided that this Norplant Suspension System is permissible. The use of this system shall be subject to the Decision of the 12th Muzakarah on 20th January 1977 which decides the ruling on Family Planning as follows:

Referring to the above question, it is permissible for the couple to use the method of tanzim al-nasal for family planning with the purpose of distancing the time between pregnancies, for the management of economy for low-income family. They should include the intention of believing that if Allah SWT wills for the couple to have a child, then nothing can stop it and they have to accept the child and take care of the child responsibly.