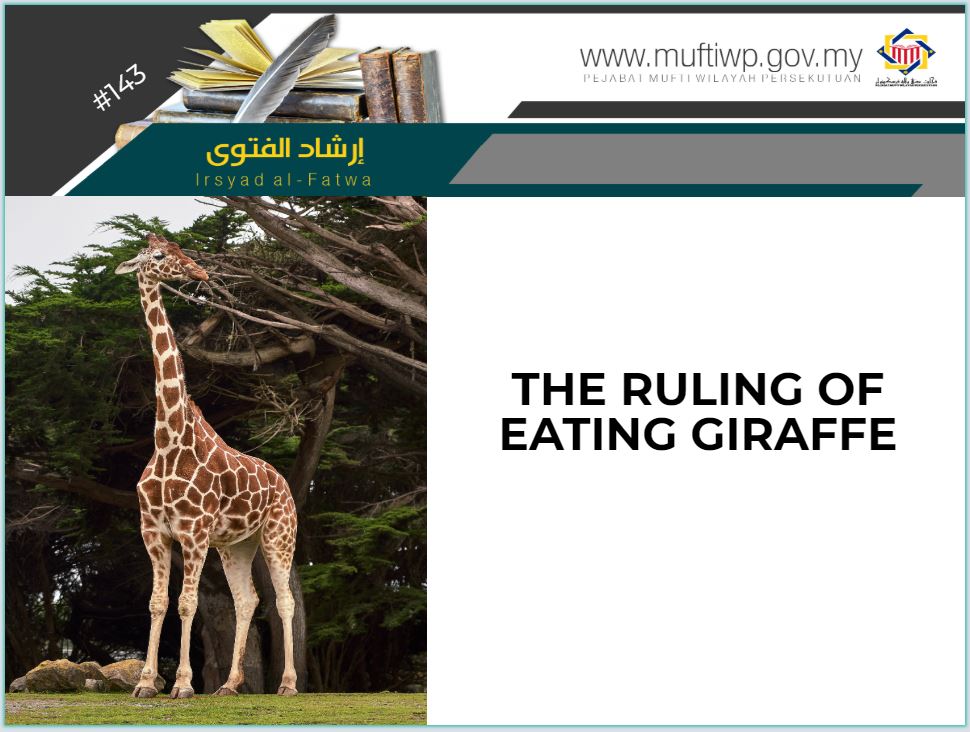 I hope for an explanation regarding the ruling of eating giraffe. Thank you so much Sahibus Samahah Mufti.

Before we answer this issue, we would first present the definition of giraffe.

In Arabic, giraffe is known as zarafah or zurafah. In al-A’jaib al-Makhlukhat, Imam al-Qazwini Rahimahullah notes on the uniqueness of this particular animal. This animal differs from other four-legged animals, for a giraffe starts to walk with its left legs unlike other animals of its kind.

According to Tarikh Ibn Khalilkan, Muhammad bin Abdullah al-Utabi al-Basri al-Akhbari al-Sy’air claimed that giraffe is a combination of three animals, namely, wild female camel, female cow and a male hyena. According to him, a giraffe is a result of a male hyena and a female wild camel reproducing a male that would then reproduce with a female cow.

However, Al-Jahiz disagrees and rejected this view, stating that these types of statements are from extreme ignorance. The reason is, Allah SWT is the Most Powerful and could create any types of animals such as a horse, donkey and others.

Giraffe (Giraffa camelopardalis) is an even-toed ungulate mammal and is the tallest living terrestrial animal. Giraffe could reach the height of up to 4.8 to 5.5 meters (16 to 18 feet) and could weigh up to 900 kilograms (2,000 pounds). Female giraffes are shorter and weigh less than its male counterparts. There are only two species in giraffe family which are the Okapi and Giraffa.

Giraffes usually inhabit savannahs and woodlands. Their food source is leaves, fruits and flowers of woody plants, primarily acacia species, which they browse at heights most other herbivores cannot reach.

Its extreme height compared to other animals, forces giraffe to either open its legs or kneel down to drink water. While standing upright, the heart of giraffe would need to pump blood vigorously to generate high pressure to maintain blood flow to the brain. When the animal lowers its head, the veins in the circulatory system contains valves preventing the blood from flowing back into the head, damaging the brain. Usually, giraffe would need approximately 160 kilometre squared / 62 mile squared of grazing ground.

The Ruling of Eating Giraffe

However, there are scholars that ruled it permissible to eat giraffe:

After analysing this issue, we are inclined towards the ruling of the permissibility of eating giraffe, for it is an herbivore animal that do not have canine tooth. Furthermore, this animal is not a reproduction of prohibited animals to be eaten such as dog and swine and it does not resemble them. Thus, this animal is similar to the groups of animals such as cows and buffaloes, although it has a tall physique compared to other animals. Wallahua’lam.