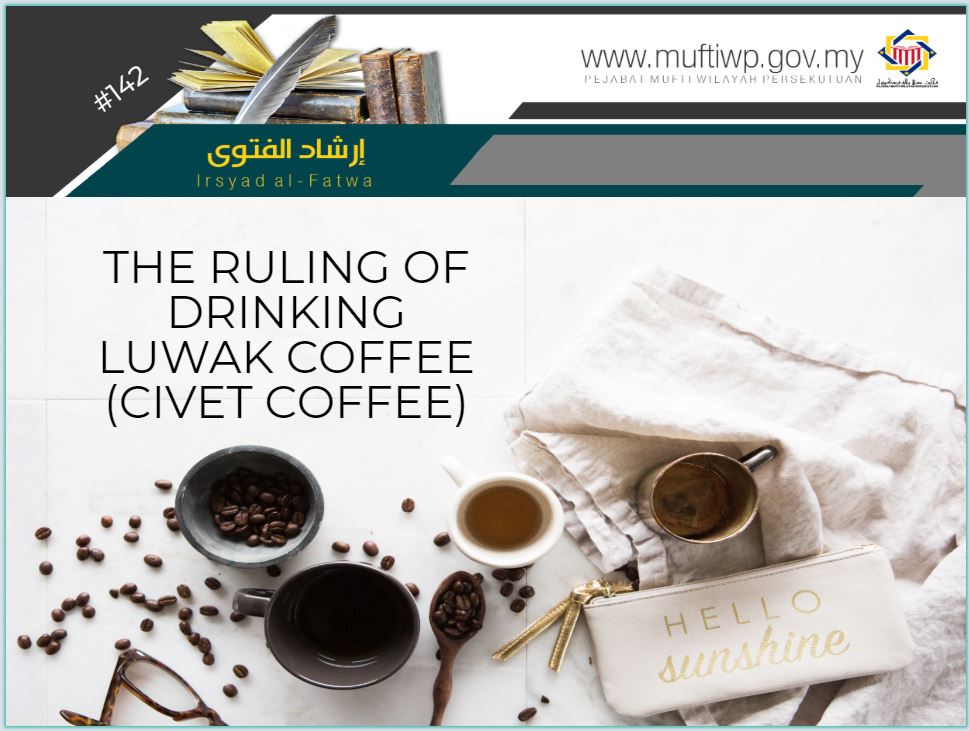 What is the ruling for drinking luwak coffee?

Coffee is a type of brewed drink prepared from roasted beans, usually known as coffee beans. Coffee  has a stimulating effect in humans, primarily due to its caffeine content. Today, it is one of the most popular drinks in the world. Coffee was first discovered in the 9th century, when the coffee beans are found in the highlands of Ethiopia. From there, it spread to Egypt and Yemen and in the 15th century, it has reached Armenia, Parsi, Turkey and North Africa. Finally, the Muslim empire helps in spreading coffee to Italy, Europe and America.

Luwak is a small catlike animal and is also known as Asian palm civet. This animal feeds on berries, pulpy fruits such as figs and palms and ripe fruits and seeds. Luwak choose only the ripest and flawless cherries and beans to eat. Coffee beans have a hard endocarp layer which are not ingested and are excreted out with droppings.

Luwak coffee refers to the coffee beans excreted out together with the droppings of civet (luwak), collected, washed and processed to make coffee. There is a small production of luwak coffee in the regions of Bali, Java and Sumatera Indonesia where they still use manual processing process (without machineries).

Islam commanded its followers to eat only of what is good and permissible. This is in accordance with the statement of Allah SWT:

“O mankind, eat from whatever is on earth [that is] lawful and good,”

“And eat of what Allah has provided for you [which is] lawful and good.”

Allah SWT also prohibits His servants from eating anything dirty and disgusting. He states in the Quran:

“Prohibited to you are dead animals, blood, the flesh of swine, and that which has been dedicated to other than Allah, and [those animals] killed by strangling or by a violent blow or by a head-long fall or by the goring of horns, and those from which a wild animal has eaten, except what you [are able to] slaughter [before its death], and those which are sacrificed on stone altars,”

From the above syar’iy evidences, it is clear that Allah SWT commanded His slaves to eat only the things that are permissible and good, and to avoid food that are dangerous and harmful. However, in the context of luwak coffee, a polemic of questions of its permissibility or prohibition arises.

Here, we present the opinions of scholars regarding this issue:

After reviewing the opinions of scholars regarding food that is covered by najis, we can conclude that most of them are of the opinion that the seed is still pure if the plant seed is still in its original form and can grow when planted.

This is in accordance with the following Islamic legal maxims:

“The original ruling of beneficial things is permissible, while for harmful things it is prohibited.”

“The original ruling of something is permissible until a clear and strong evidence prohibits it.”

According to the above fiqh, luwak coffee is ruled permissible for the beans are originally clean and processed through the digestive system of the civet, excreted out still retaining its original shape and state without any damage on the structure of the coffee beans.

Furthermore, we also include several fatwa and opinions of scholars regarding this issue:

After analysing this issue and reviewing the opinions of scholars, we are inclined towards the statement that considers it as mutanajjis (covered with najis) but after washing and processing then the najis is removed. Thus, it is PERMISSIBLE.

The same is stated by the decision of most Indonesian scholars that ruled luwak coffee permissible and they are more knowledgeable regarding this issue. Hence, we would like to take this opportunity to advise Muslims to always be careful in eating or drinking and making sure that it is in accordance with the principle of halalan tayyiban. Whatever we eat, or drink will later grow as a part of our body, thus, we need to make sure that whatever we put in our body are only from the permissible sources to prevent us from falling into Allah SWT’s hellfire. Wallahua’lam.