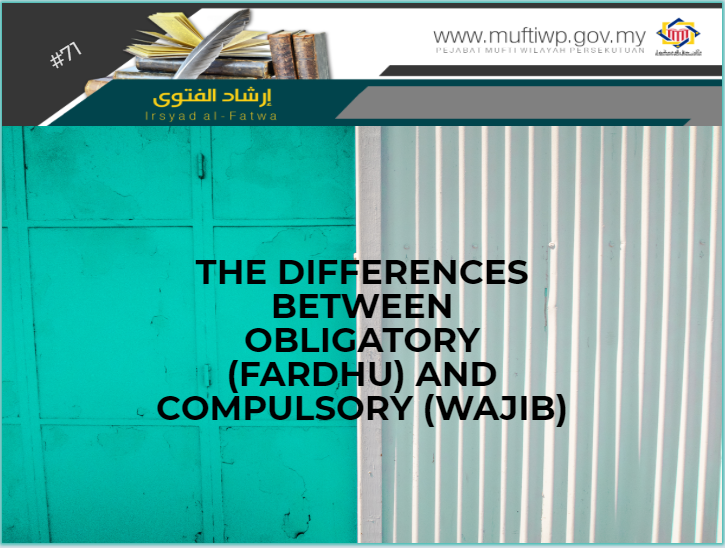 Please state the differences between obligatory (fardhu) and compulsory (wajib).

Obligatory (fardhu) is a command of doing something in an absolute (جزم) command. The doers will be rewarded and there are punishments for those who leave them.

For example, fasting. The Sharia’ commands to fast with the absolute command. It is according to the Quranic verse:

“O you who have believed, decreed upon you is fasting...”

Thus, whoever fasts, will be granted with enjoyments in the Paradise, while those who do not will be punished in the Hellfire.

In Mazhab al-Syafie, fardhu and wajib both carry the same meaning, except in Hajj. Wajib here means every ritual which is not related to the requirements of the validity (sah) of one’s hajj. In other words, leaving rituals that are wajib in hajj does not invalidate the hajj.

For example: Throwing stones at the pillars, enter ihram (sacred state) in Miqat and other rituals that are wajib. Although a person leaves these rituals (whether intentionally or unintentionally), his or her hajj is still valid (sah), but considered as mistakes in hajj. So, he or she has to make up for it with fidyah, which is slaughtering a sheep, goat, cow or camel.

Meanwhile, fardhu in hajj means rituals that will invalidate the hajj if neglected.

For example: wuquf at the Arafah, tawaf ifadha, and other rituals. If someone left any of these rituals, then his hajj is invalid.