IRSYAD AL-FATWA SERIES 2: THE MEANING OF QADHA’ AND QADAR 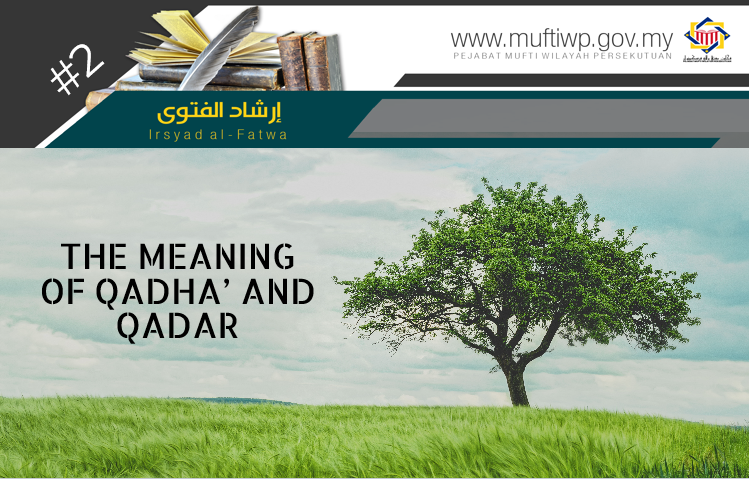 What is the meaning of qadha’ and qadar?

In Arabic, qadha’ means placing and deciding a certain ruling.

While from syarak’s perspective, qadha’ is something that has been decided by Allah SWT for all His creations, whether it is in terms of its creation, destruction or changes.

In Arabic, qadar means setting something to a certain amount.

While in syarak, qadar is something that has been set at a certain amount since the beginning of time, so that it follows His knowledge which precedes everything.

The Differences Between Qadha’ and Qadar

Qadar is setting an amount or extent of something before deciding that it would happen. While qadha’ is making something happen according to a set condition. This means, qadar happens first before qadha’, both are complementary to each other and are inseparable.

Ibn al-Athir gave analogy of qadar as a base of a construction and qadha’ as a building being constructed on top of the base. Sayyid Sabiq in his book Aqidah Islam said, it has been stated numerous times in the Quran regarding the issue of qadar or fate, among them are:

And everything with Him is by due measure.”

Al-Maraghi commented: Everything has its own limits set to it not going beyond or below it.

“And there is not a thing but that with Us are its depositories, and We do not send it down except according to a known measure.”

Sayyid Qutb said: Only to Allah SWT will everything return to and every person will go back to his creator in its accurate time.

“Indeed, all things We created with predestination.”

Al-Maraghi said: “Indeed, everything that happens in our lives in this world is the predetermined by Allah SWT and its formation is in accordance with the determination of His wisdom the All-Knowing and His law is comprehensive and suitable with the sunnah He has set on His creations.”

Thus, these laws are the general rules or certainty bound by reasons and among the law of cause and effect. Imam al-Nawawi Rahimahullah defined fate as: “Indeed, everything that is created by Allah SWT has its own set of laws governing it. Allah SWT is the All-Knowing of every single thing that happens to anything in the set times, in accordance with the set rules set by Him. Thus, when this happens, surely, it will follow the attributes and situations specific and accurate as what has been set by Allah SWT.”

“Allah makes something in accordance with particular set of laws and form determined by the will of Allah SWT.”

According to the above meaning, then qadar is among the attributes of an essence, while qadha’ according to Asya’irah means:

“The will of Allah upon everything from the beginning of time in accordance with whatever is suitable on it to this time,”

Hence, qadha’ is among the attributes of an essence according to this meaning. While qadha’ according to Maturidiah is:

“Allah created something with a supporting addition and assessment.”

The commentator of the above statement brings the words of the author in madhhab Maturidiah in matters pertaining qadha’ and qadar, not in the madhhab of Asya’irah for qadha’ through the lexicon perspective has approximately seven meanings and the most renown definition is al-Hukmu which means “conviction” which comes back to fi’il (verb) which is suitable when commenting the term with fi’il. As for qadar, its meaning is not fi’il, thus, it is not suitable to define the term with fi’il unless with knowledge.