IRSYAD AL-FATWA SERIES 6: THE MEANING OF ‘AMIN’ AFTER THE RECITATION OF AL-FATIHAH 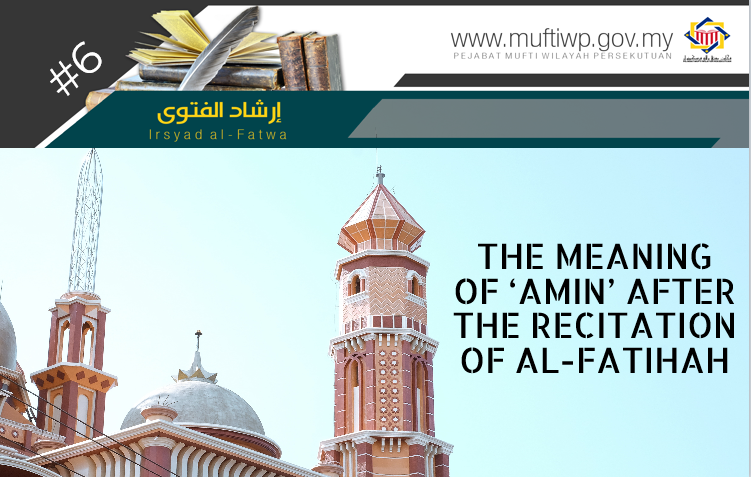 What is the meaning of ‘Aamin’ (آمين) and is it a part of the Fatihah?

‘Aamin’ means Please grant it. It is a word of prayer and not a part of al-Quran al-Karim according to the consensus of scholars. This is based on the evidence that it is not written in the mushaf. Ibn al-Anbari agrees with the above opinion saying: Aamin is included as a verb which means an action. It means: “O Allah, please grant our supplication.” There are two ways it is recited, whether it is a short recitation أمين on the wazan of فعيل or with a long recitation of آمين on the wazan of فاعل.

In a hadith from Abi Musa al-Asy’ari, the Prophet PBUH said:

“and when he recites: Not of those with whom Thou art angry, nor of those who go astray, say: Amin. Allah would respond you”

The advantages are clear according to a hadith of Abu Hurairah RA, where the Prophet PBUH said:

"Say Amin when the Imam says Amin, for it anyone's utterance of Amin synchronises with that of the angels, he will be forgiven his past sins”

The Meaning of the Word Amin

According to scholars, aamin means ‘O Allah please grant our supplication’. This is the opinion of al-Hasan and al-Zajjaj. In Arabic, it is recited with a long or short recitation. Al-Hafiz al-Munziri said: It is said that Aamin is one of the names of Allah SWT. This is also the opinion of Mujahid, Hilal bin Yasaf and Ja’far bin Muhammad. There is also an opinion which states that aamin means it is as it is hoped, this is stated by Ibn al-Anbari from Ibn Abbas and al-Hasan. Scholars of Arabic syntax state that aamin is isim fi’il (verb). The word aamin is agreed by scholars to not be a part of the Quran. Thus, it is sunnah to pause and separate the recitation from the last recitation of al-Fatihah.

Sunnah to recite Amin for Every Supplication

According to a narration of Abu Daud with a hasan sanad from Abi Zuhair al-Numairi, we used to sit in the company of Abu Zuhayr an-Numayri. He was a companion of the Prophet (ﷺ), and he used to narrate good traditions. Once a man from among us made a supplication. He said: End it with the utterance of Amin, for Amin is like a seal on the book.

Then he narrates how the Prophet PBUH said to a person who was supplicating:

end it with Amin and receive the good news

In a hadith from Anas RA: “Whoever ends the recitation of Fatihah with aamin, surely, the angels will not stay in the sky unless they ask for forgiveness for him.” In a hadith from Abi Hurairah RA, the Prophet PBUH said:

“Aamin is the seal of the God of the whole universe on the words of His believing slaves.”

The author closes this statement citing the words of Saidina Ali RA who said: ‘Amin is the seal of the God of the universe as the closing of supplication for His slaves’, it is an explanation of how the recitation of ‘amin’ is like an official seal of a letter which prevent others from opening or damaging the letter. While for those who supplicate with it will be prevented from any failures.