IRSYAD AL-FATWA SERIES 17: HOW SHOULD ONE DISPOSE AL-QURAN DAMAGED BY A FLOOD? 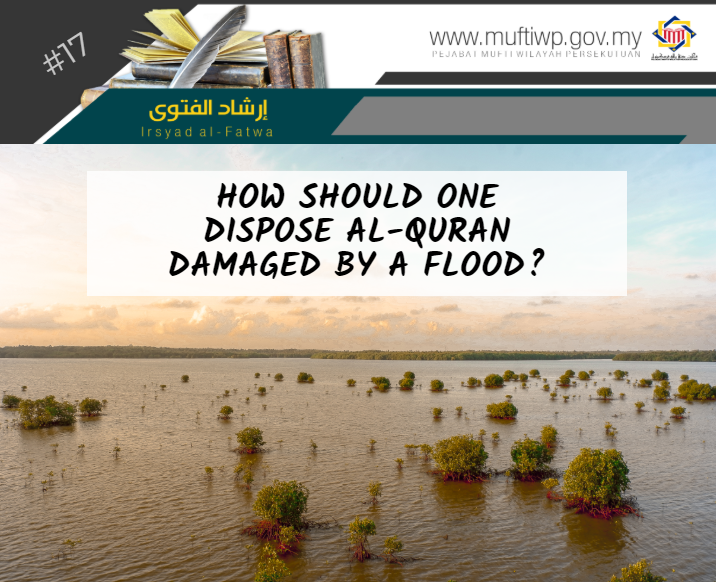 How is the best way to dispose of damaged al-Quran in the flood that recently struck some states of Malaysia?

Before we discuss the answer to this question, let us all reflect on the disaster of the flood that had befall some states in Malaysia. Despite this trial, patience, redha and help in terms of money, donations and physical help is offered from various parties. Such efforts should be encouraged and cultivated.

Indeed, it is We who sent down the Qur'an and indeed, We will be its guardian.

Actually, we have answered this question previously in Irsyad al-Fatwa Series 12. However, this time we will explain it further. Scholars have differing opinions as to how one should dispose of al-Quran; they are divided into two opinions.

First: The opinion in madhhab Hanafi and Hanbali state that it should be buried.

Second: According to the opinion in madhhab Maliki and Syafi’I, it should be burnt.

After analysing both opinions of whether it should be buried or burnt, we see both are permissible for the purpose is to honour the Quran or mushaf.

However, we are inclined to the arguments in madhhab Syafi’e and Maliki which is for it to be burnt. The action of the companion of the Prophet PBUH such as Saidina Uthman is the ijtihad from him and this is not defied by any other companions, which makes it a strong argument for the permissibility for it to be burnt. The reason is, it is already damaged by the flood and it would be best if the remaining ashes are buried to also celebrate the first opinion from madhhab Hanafi and Hanbali.

Alhamdulillah with the advancement of technology, there is now an incinerator that is able to burn the Quran completely until it turned to just ashes and when the ashes are buried, surely, it will be safe from being degraded or stepped on, this is the best way in honouring the Quran.

This is also applicable for issues regarding the written names of Allah SWT, hadith books, and religious books, where we should honour them by disposing them the same way as the above-stated way of disposing of the mushaf.

Hopefully, this issue could help resolve the issue of disposing of damaged Quran that was soaked in water for a duration amount of time.