IRSYAD AL-FATWA 18: THE RULING OF RECITING AND REVIEWING ONE’S MEMORIZATION OF THE QURAN DURING MENSTRUATION 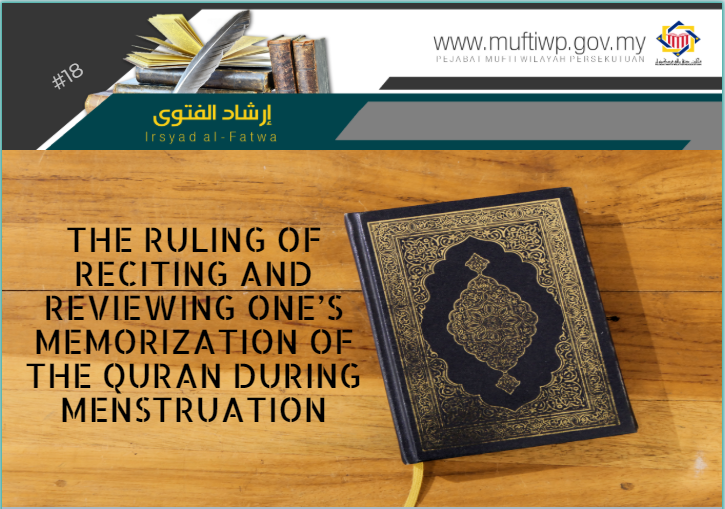 At the beginning of the year, a new school session starts. Most of our children will start their new school term and some would start their boarding schools which are based on the concept of the memorization of Quran such as SEMESTA, IMTIYAZ, MRSM Ulul Albab and private tahfiz institutions. The question is, is it permissible for our female students to recite or review their memorization when they are menstruating?

In this issue, there are two opinions:

First: Prohibited. This is the opinion of the majority of the scholars. They prohibit women from reciting the Quran when they are in an impure state such as when they are menstruating or in the state of junub. This is in accordance with a hadith from Ibn Umar RA:

"The menstruating woman does not recite - nor the Junub - anything from the Qur'an."

This hadith is dhaif (weak) according to some scholars for some of the narration is from Ismail bin Ayyash who are among the people of Hijjaz and their narration is dhaif.

Second: Permissible. This is the opinion of Malikiyyah scholars according to an authentic narration, it is permissible to hold the Quran for women who are menstruating and it is also permissible to recite it for the purpose of teaching and learning.

It will also facilitate madrasah Tahfiz al-Qur’an to continue its lessons so that the huffaz will not forget their memorization due to the stop of the recitation due to menstruation.

As a conclusion, reciting and memorizing the Quran while menstruating is PERMISSIBLE according to the reasons presented above. Here we would like to reiterate several opinions or athar that supports this opinion.

I would like to assert a good opinion from former Syeikh al-Azhar, Syeikh Jad al-Haq Ali Jad al-Haq through his book Buhuthun wa al-Fatawa. He stated the permissibility of female students who are menstruating to memorize the Quran and recite it while menstruating considering factors such as examinations or tests. The reason is, the time is limited and short. Hence, the concept of exigent circumstances or masyaqqah is applicable.

There are also opinions stating that the ruling of menstruating women is the same as women who are in nifas in terms of reciting the Quran; where it is permissible for the woman to hold and recite the Quran if she is either a teacher or a student. (See Hasyiyah al-Dusuqi, 1/175)

I advise students to substitute reciting the Quran with listening to the Quran through CDs or Youtube that is the same as reviewing and repeating the memorization of the Quran.