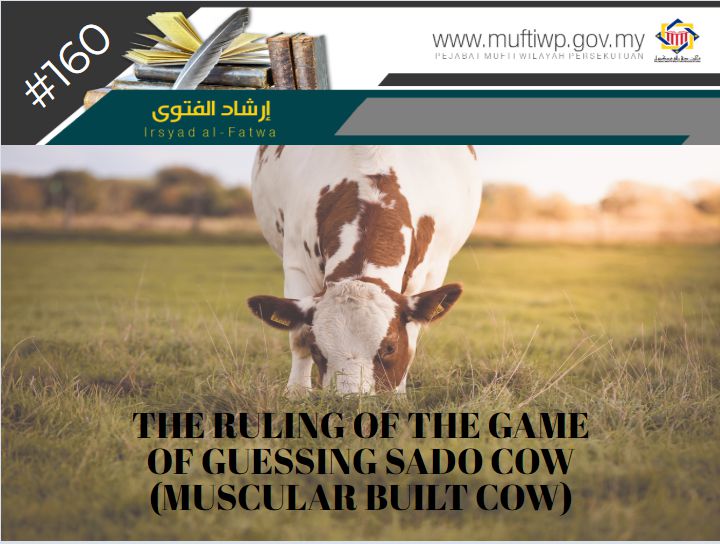 Recently, I went to a MAHA expo where there is an exhibition of sado (muscular built) cow. While attending the exhibition, I was invited to enter a game of guessing the muscular built cow and the entrance fee is RM10.00. I hope to get an explanation from Datuk Mufti regarding the ruling of this game.

Before we discuss the ruling for this issue, let us first study the definition of gambling, evidence of its prohibition and the conditions of gambling:

Literally, gamble is also known as al-maisir or al-qimar in Arabic, which means betting on something using arrows and it is a custom of the Arabs. Gambling games also includes gambling using rocks, dice or any type of bets.

The scholars presented several opinions for the usage of term:

From the above discussion of scholars’ opinions regarding the definition of gambling, it can be concluded that gambling is any type of game or contest that involve a bet from the contestants and there will be a winner and a loser.

The Prohibition of Gambling

Gambling is clearly prohibited according to the Quran, hadith and scholarly consensus (ijma’). Allah SWT states:

“They ask you about wine and gambling. Say, "In them is great sin and [yet, some] benefit for people. But their sin is greater than their benefit." And they ask you what they should spend. Say, "The excess [beyond needs]." Thus, Allah makes clear to you the verses [of revelation] that you might give thought.”

In another surah, Allah SWT states:

“O you who have believed, indeed, intoxicants, gambling, [sacrificing on] stone alters [to other than Allah], and divining arrows are but defilement from the work of Satan, so avoid it that you may be successful.”

“Satan only wants to cause between you, animosity and hatred through intoxicants and gambling and to avert you from the remembrance of Allah and from prayer. So, will you not desist?

The prohibition of gambling is also stated in a hadith of the Prophet PBUH, where he said:

“Whoever says to his companions, 'Come let me gamble' with you, then he must give something in charity (as an expiation for such a sin).”

Furthermore, gambling has also been prohibited by the scholarly consensus (ijma’). Ibn Hazim al-Zahiri, al-Jassas, Abu Hayyan al-Andalusi, Ibn Taimiyyah and al-Qurtubi state that none of Islamic scholars concurs the prohibition of gambling.

After presenting syarak evidences regarding gambling, it is clear that Allah SWT prohibits any type or form of gambling, for it is a method of wrongfully taking someone else’s property, that could lead to conflict, enmity and hatred. The following are the conditions set by Islamic scholars to classify a certain game or contest as gambling:

According to Islamic scholars, any type of game where the winner receives a reward from a third party, not from anyone involved with the game, then it is considered as just a game and the reward is considered as a gift.

A game is also not considered as a gamble when the reward is just from one party. For example, if someone said to his friend, “If you could beat me, I would reward you. However, if you lose, you don’t have to give me anything.”. This is in accordance with a hadith narrated by Abu Daud where the Prophet PBUH was challenged by a Quraisy disbeliever named Rukanah to wrestle with him with the reward of a few goats if the Prophet PBUH wins. The Prophet PBUH accepted the challenge and won.

However, any type of game where a person wins all of the bet while the loser loses his bet, then it is prohibited.

Prof Dr Yusuf al-Qardhawi wrote about a type of a game known as lottery and he includes this game as a form of gambling. Since gambling is prohibited, lottery should not be used for social and humanitarian aid purposes. Those who permits lottery for these purposes are really the same people that held charity funds and donations through prohibited concerts and art festivities. The best way to answer them is by citing the words of the Prophet PBUH, where he said:

“Allah the Almighty is Good and accepts only that which is good.”

Regarding to the question asked, there are two main issues in this situation:

Both elements give rise to doubts and polemic, for majority of people considered it permissible because there is an involvement of a third party that sponsors the prize.

Statement from the Mufti of Federal Territories

After presenting the definition of gambling, its prohibition and the conditions of it, in our opinion, the game of guessing the muscular built cow contains elements of gambling, because:

Usually it will be permissible if there is a third party sponsoring the prize for the game. However, it is not so in this case. The entrance fee has made it prohibited as there still are presence of the elements of luck and zero-sum game.

Muslims are advised to be careful in this modern day, to avoid getting involve in sin and transgressions towards Allah SWT. For those who won the game, they should give their prize to Baitulmal to be managed and given to the poor and needy for they have a right to the prize. May Allah SWT protects us in this world and the next.